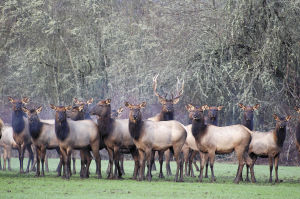 Half a century ago, when the William L. Finley National Wildlife Refuge south of Corvallis was established to protect migratory waterfowl, sightings of Roosevelt elk were a rare occurrence in the Willamette Valley.

In recent years, however, the majestic animals have made quite a comeback on the valley floor. In the last decade, the Oregon Department of Fish & Wildlife estimates, the population has mushroomed from 100 to at least 600 individuals.

The biggest herd in the region makes its home on the Finley Wildlife Refuge, where an estimated 200-plus elk have become a major draw for visitors — and a growing problem for neighboring landowners.

State and federal wildlife managers say the animals cause extensive damage when they periodically wander off the 6,000-acre refuge, eating or trampling crops and knocking down fences that stand in their way.

Now, to reduce the damage, ODFW and Finley biologists are floating a plan to reduce the herd by opening the refuge to elk hunting for the first time.

If approved by the U.S. Fish & Wildlife Service, the plan would allow a three-month hunting season for antlerless elk (cows and “spikes,” or yearling bulls) in the late summer and early fall.

Five permits would be issued to Willamette Valley elk tag holders each month from August through October for a total take of up to 15 elk, and only bowhunting would be allowed the first year.

“We have a goal to reduce the size of the elk herd by 20 percent over five years,” said Jock Beall, the refuge biologist at Finley.

The plan is being welcomed by most area farmers and duck-hunting clubs, which plant corn to attract waterfowl.

But the idea is not without controversy. A large number of Finley’s 100,000 annual visitors come to the refuge to watch or photograph wildlife. To them, the elk are rock stars.

You can count Ricardo Small among that group.

A retired Arizona real estate appraiser who now spends most of the year in the mid-valley, he’s a regular at Finley. From his perspective, any damage the elk may be doing on private property shouldn’t be the refuge’s problem.

“The elk are a major magnet for visitors, and there is no information I can find in any Fish & Wildlife report to indicate the elk are doing any damage to resources on the refuge,” Small pointed out.

“My position is there’s no reason to open up the refuge to elk hunting. Let them open up their land to hunting — but I guess that’s not palatable to the private landowners.”

As recently as 1989, there were only about 20 elk on the Finley National Wildlife Refuge. A decade later the tally had jumped to 100, and last year the Finley herd numbered 163 animals.

A second herd of 38 elk has taken up residence since then, according to Beall, and there’s another group of 10 to 15 bachelor bulls that hangs around the fringes of the two established herds.

There’s plenty of forage and tree cover on the refuge, and because hunting currently is not allowed at Finley, it provides a safe haven for the animals during the valley elk season, which runs from August through March.

It’s good habitat for Roosevelt elk, the largest North American subspecies, which can weigh in at half a ton and stand 5 feet tall at the shoulder. In fact, the biggest Roosevelt bull on record was taken just south of the refuge boundary in 2002. The taxidermied trophy is now on display at Cabela’s sporting goods store in Springfield.

Even though the refuge proposal would not allow hunting of mature bulls (which tend to be targeted by off-refuge hunters and are underrepresented in the Finley herd), some wildlife lovers fear any hunting would make Finley’s elk skittish.

“I oppose the plan mainly because of what it would do to the recreational aspect — viewing elk on the refuge,” said Phil Hays, another refuge regular, in an email to the Gazette-Times.

“The (environmental assessment) specifically states that hunting causes elk to remain hidden during the day, and they come out to feed at night,” he added. “The refuge is open dawn to dusk. Seems to me that hunting will make the already elusive herd less visible to visitors at the refuge.”

ODFW biologist Steven Marx, who served as a consultant on the management proposal, says he can undrestand that point of view. But he added that his agency has a responsibility to do something about the “chronic damage” caused by elk in the area.

“A lot of times it’s difficult to appreciate the problem until it’s on your property,” Marx said.

“The goal is not to eliminate the elk, it’s to manage them at a level compatible with local land use.”

Finley already takes criticism from farmers who suffer crop damage from the thousands of migrating Canada geese that winter in the Willamette Valley, roosting on refuge ponds by night and hammering nearby grass seed fields by day.

The rapidly growing elk population is quickly becoming another sore point for neighboring landowners, and refuge managers see the hunting proposal in part as a way to show they care and are willing to take steps to keep the problem from growing worse.

“Part of it is to show we are trying to be responsive,” Beall said.

“(And) some of it is meant to be preventative — so we don’t wait to see how much damage there will be if we have 300 elk.”

Sam Hunt has earned his sixth No. 1 single with “Kinfolks,” hitting

-
Singer, composer and actor Lyle Lovett returns to The Shedd

-
Love, loss and creation merge in unexpected ways as the

-
The Riverside Chamber Symphony will perform three works at the Richard