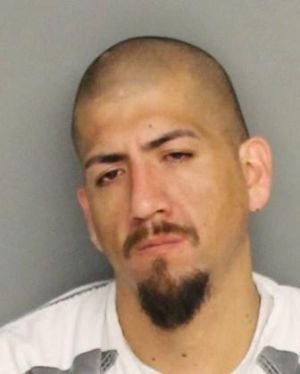 A 33-year-old Corvallis man was arrested early Thursday morning after residents in north Corvallis hearing gunfire on the 3200 block of Northeast Lancaster Street and witnessed a man nearby in a dark hooded sweatshirt.

Corvallis police found four .25-caliber casings in a parking lot when called to the scene at 3:36 a.m., but were unable to identify an intended target, according to an officer's probable-cause affidavit. They arrested the suspect roughly a half-mile from the scene on the 100 block of Northeast Conifer Boulevard.

Joseph Gomez reportedly showed signs of being under the influence of methamphetamine and had a .22-caliber, semi-automatic rifle with a shortened barrel and homemade suppressor hidden in his pants, along with a .25-caliber handgun and a bindle of methamphetamine.

Witnesses identified Gomez as the person they saw leaving the area of gunfire, according to the court document.

2014 NFL Schedule: Primetime Unkind to Seattle, But Philadelphia Will Shine

Oregon State Police is currently investigating a shooting incident that occurred on Interstate 5 near Brooks.

Maddie & Tae will release a new holiday EP, We Need Christmas, on Oct. 23. The

Ingrid Andress has revealed she will release a deluxe version of her 2020 debut album, Lady