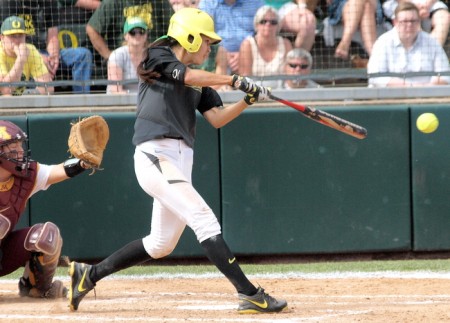 For the third time in four seasons, the Oregon Ducks are in Oklahoma City for the Women’s College World Series. And while in the previous two appearances all parties stated the goal was a national championship, the eight team field was littered with programs that have won titles and enjoyed a longer legacy of success than the Ducks.

The 2015 field is similar though one key difference is the Ducks are no longer a “newcomer” and from the beginning of fall camp in September been pointing to this tournament as theirs for the taking. With the disappointment of falling short of the goal last season stoking the fires of ambition for 2015, the Ducks enter the tournament as the #2 seed and have every expectation of surviving the round robin phase of the double elimination tournament to be one of the two teams playing for the title.

From there head coach Mike White is willing to take his chances at bringing home the big trophy.

“We are not happy just to be going there (Oklahoma City), we need to take the next step … Alabama, Florida certainly didn’t win it their first or second time out there. It took Florida six times to win it … we are excited to be there.”

There is no ignoring the fact White singled out several teams from the SEC, five of the eight team field comes from the conference, including the defending national champion Florida Gators.

The Ducks however will open with a more familiar opponent, Pac-12 conference runners-up UCLA in the opening game. Alabama and Michigan round out Oregon’s bracket with an all SEC field (Alabama, Florida, Tennessee and Auburn) on the other side.

But then so are the Ducks and with a dominant pitching staff made that much more potent by the recent success of Karissa Hovinga giving White an alternative to Cheridan Hawkins and a batting order that is lethal from one to nine, Oregon’s expectations are sky high.

Oregon and UCLA open the festivities Friday beginning at 6:30. ESPN2 will televise.

Carrie Underwood To Hit The Road For Book Tour