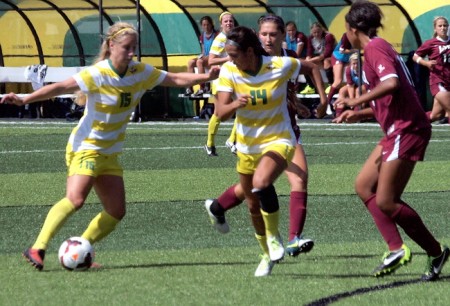 As she enters her third season, Oregon head women’s soccer coach Kat Mertz is seeing the first signs of a new culture take root. In a conference that is the nation’s toughest from top to bottom, the Oregon program has found it difficult to break into the upper division of the standings. Only once have the Ducks finished higher than 7th, in 2006 when Pac-10 player of the year Nicole Garbin led Oregon to a second place finish with a record of 12-6-2 overall and 6-1-2 in conference.

Seen as a fluke result, Oregon’s reputation preceded them with the NCAA selection committee and the Ducks were famously passed over for an NCAA tournament bid.

A first post season appearance is unlikely in 2015 but those first indications of a changed atmosphere around the program have Mertz encouraged about the present and hopeful for the future.

“We really have a whole different mixture out there, some different personalities,” she said. “So far I really see an enthusiasm and commitment to what we are trying to do.”

Two of Oregon’s stalwarts over past four years – keeper Abbey Steele and forward Bri Pugh – are gone to graduation, leaving Mertz with key roles to fill both in net and on the attack.

The first move was to shift senior forward Kristen Parr to the back line where her experience and leadership are expected to offer a degree of confidence to the new keeper.

“I’m excited,” Parr said of the switch. “Just little things here and there… getting used to playing with my back to the net, things like that.”

Halla Hinriksdottir, Lauren Holden and Katie McCormick are the three candidates to replace Steele between the pipes and will count on Parr to direct the back line defense to limit the number of times they will be tested.

As a senior, Parr has witnessed the transition under Mertz and says the Ducks have embraced the new approach. ”It is the team chemistry,” she says. “It’s knowing that when we come to those moments instead of one person … it’s all of us together. If we do it together we can get the job done.”

Goal scoring has been an ongoing Achilles heel for the Ducks with several opportunities lost when a single defensive breakdown would leave Oregon on the short end of the result.

Mertz hopes to see an improved attack in 2015 with the return of ShayLee Mner and Maryn Beutler – both of whom were lost to injury last year.

As a freshman Miner was a consistent thorn in the side of the opposition with her aggressive defense and quickness in the box.

“It gives me a little bit of an advantage,” Miner said of her new perspective after watching from the sidelines for a season. “It helped me with getting a better vision, I guess, I got see a lot of things you wouldn’t see just playing… so it definitely will help.

Picked to finish 11th by in the conference coaches poll, Mertz has higher expectations and some justification for her optimism.

It is, she said, a matter of her team “understanding that for us on a daily basis, everyone has the opportunity to lead … motivating players, going to class on time, picking up a roommate here and there.”

“Chip Kelly’s term was horizontal leadership… that’s been the really cool part, seeing them take ownership … rather than just being a passenger – ‘this is what coach is telling us’ – this is what we are doing because this is what we believe in. That evolution for us has been awesome.”

“If we can find a way to change that mentality, that approach of not being afraid to finish out a game but going into those final minutes it’s ‘we are going to win this game’ – it’s a shift in mind set.”

Oregon opens the season at 7:00 Friday at Pape` Field against LSU.