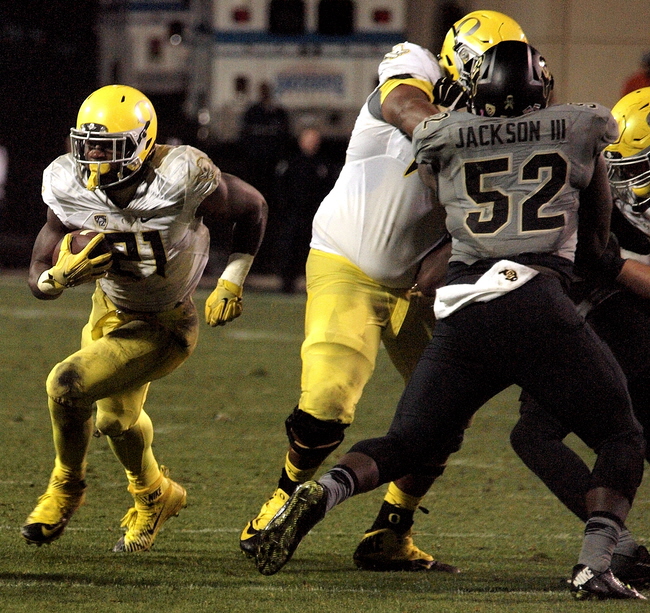 The routine for the media after each home game goes a little something like this: first make your way down to the field from the press box. Exit Autzen Stadium through the tunnel as the players shuffle by en route to the locker room. Congregate for a short wait in the lobby of the Casanova Center. Then we are escorted down a long winding corridor to the Hatfield Dowlin Complex and up a few flights of stairs to the media room for post-game interviews.

Football posters from seasons past adorn the long windy hallway that connects the two facilities — a bridge connecting the past to the future of Oregon Football.

I couldn’t help but be a little nostalgic of the seasons on the wall as I passed each poster after the devastating loss to Utah.

I first started covering Oregon Football in Eugene in 2002. Over the years the seasons kind of start to run together — but the posters, the uniforms, quickly brought back memories reminding me not only of the countless wins but some of the tough losses — which this new building hasn’t had to experience until the 2015 Utes came to Autzen and delivered the worst home beating since 1977.

Like in 2003, when Oregon utilized a two quarterback system with Kellen Clemens and Jason Fife and they led the Ducks to upset no. 3 Michigan. The biggest upset at home for longtime coach Mike Bellotti. The win landed Fife on the cover of Sports Illustrated. The Ducks shot up the polls. The celebration was short-lived. The next game Oregon lost 55-16 at home to Washington State thanks in part to nine turnovers and two blocked punts and went on a 3-game losing streak finishing the season 8-5 after a one point loss to Minnesota in the Sun Bowl.

Even in a season like in 2004 when Oregon finished 5-6, 4-4 in conference play after losing the Civil War in Corvallis. Oregon State rolled up a series record for points in a 50-21 blowout of the Ducks at Reser Stadium in a game that catapulted the Beavers into a bowl and left Oregon home for the holidays. The first losing season under Bellottis tenure and extended the Ducks’ losing streak in Corvallis to eight years. Yet, there were still players that started to shine, lead, and aspects of the game to build on.

The highs and lows of a game that can often at times be cruel. Where one mistake snowballs into several and suddenly the team on the field is unrecognizable even though they’re wearing the right colors. The Utah loss was not only an eye-opening evening for Oregon football, exposing deficiencies; it was also a humbling experience for the coaching staff.

Passing Game Coordinator/Secondary Coach John Neals’ first year at Oregon was that losing season in 2003 and said this year has been the most challenging as a coach during his tenure as a Duck, “I’m going to be really strong,” Neal said after the Utah loss. “I’m a strong personality and I can overcome things and I’m going to make sure that I express that to my players because it may be a year, it may be two years, then all of a sudden we’re really good and people are going to forget this. But in the meantime I have to deal with it. It’s a major challenge.”

A lack of execution in all facets of the game was on display under the lights; particularly the young secondary looked lost as Utah’s wide receivers sauntered into the end zone at times without an Oregon jersey in sight. The defense surrendered 530 yards in total offense.

Vernon Adams Jr. started at quarterback for Oregon despite a broken finger that kept him out of the Ducks’ victory over Georgia State, but he didn’t last long looking tentative and was replaced by backup Jeff Lockie in the second quarter. Helfrich would later explain it wasn’t just the injury that warranted the change.

While the lop-sided Utah loss may have left Duck fans longing for the team they watched play for a national title nine months ago, Neal expressed faith in this group, “My guys are going to respond. I know they will.”

To see how the Ducks’ were going to rebound was to be determined in Colorado.

The Buffs, a team that has been slowly building confidence coming off a three game winning streak, wanted nothing more than to take down the defending conference champion and earn their first conference win in 23 months. Oregon – in uncharted waters, unranked for the first time since 2009, and with a .500 record for the first time in more than a decade – took the field on a soggy Saturday in Boulder. As if that weren’t enough baggage, three weather delays added to the tension before the Ducks were given the chance to prove the Utah performance wasn’t reflective of their true character.

Transfer Adams Jr. again was absent under center. Helfrich said at his Sunday press conference that both Lockie and walk-on Taylor Alie showed enough in practice to earn time on the field. A rotation was put in place and the duo combined for 12-of-20 for 137 yards, a touchdown and an interception. Lockie’s interception came in the end zone in the first quarter while Alie went 4-of-9 but threw the touchdown pass, of 43-yards to Jalen Brown in the fourth quarter.

“Taylor had a fantastic camp,” said Helfrich after the Colorado win. “He had a lot of people in his camp, as far as supporters of where he fell on the depth chart. Those guys have both done a great job of being competitive through this, through not winning the job, so to speak — battling through that hurdle and they’ve both managed that really well.”

The spark that ignited the offense came late in the second half. It took all of three plays to cover 78 yards after Taj Griffin got loose with an outlet pass for 26 yards, and then Oregon pulled a double reverse with wide receiver Bralon Addison throwing a 39-yard touchdown pass to Charles Nelson.

Oregon’s ground attack went to work, running backs Royce Freeman and Griffin combined for 278 yards, while Oregon piled up 537 yards of offense. Meanwhile the CU running game, which had been a strength, was contained by an improved Oregon defense that gave up 62 points to the Utes a week prior. Quarterback Sefo Liufau was flooded by Oregon jerseys making the Buffs one dimensional as possible and came up with five sacks and three turnovers, two by Joe Walker.

Overall, the team responded with glimpses of improvement and promise.

Even though question marks remain in several key areas as the leaves turn and start to fall in Eugene, the glass could be seen as at least half-full as every game day players are starting to shine; Addison, Walker, Griffin, Freeman, Buckner…to name a few. How this Oregon team will be remembered in the halls of the Hatfield Dowlin Complex remains to be seen but Saturday is new day to write one of the many chapters in Oregon Football.

The post The Glass is Half-full/Half-empty for Ducks appeared first on DuckNews.com.

Lauren Alaina will release her new EP, Getting Over Him, on Sept. 4. Lauren co-wrote all