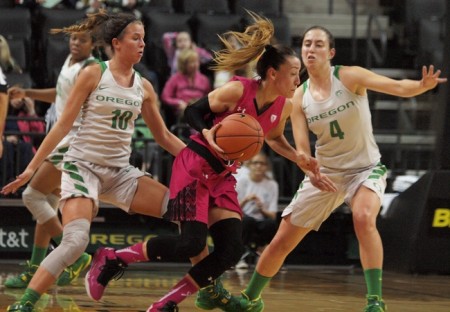 “Our players have never played in a big game in February, really, a meaningful game,” was head coach Kelly Graves’ take after his squad upended Utah 69-58 for a very meaningful victory on a February evening at Matthew Knight Arena.

“So I think they’re having some fun with it, and it’s great.”

No doubt it was fun, but it was also a hard fought, bare knuckled game with the Ducks leading most of the way but the Utes always within striking distance should they falter.

“Well, we kept our composure, number one.,” said Graves. “We got the ball in the hands in our better ball handlers and we got fouled.

Senior forward Jillian Alleyne again led the way with 27 points and 13 rebounds, breaking Bev Smith’s program record for double-double’s with the 89th of her career.

Sophomore Lexi Bando added 13 points for the Ducks. Utah center Emily Potter was a constant thorn in Oregon’s side, hitting 10 of her 13 shots  to lead the Utes with 23 points.

“Our team right now just has a good state of mind,” said Alleyne. “We have confidence, way more confidence than we did in the first five games of Pac-12 play, and that is carrying us into each game and we are continuing to be consistent.”

The Ducks will look for the weekend sweep when they host Colorado at Matthew Knight Arena on Sunday for a 4:00 pm opening tip.

Ducks Get Hot Early in Win Over Georgia State

-
Actors Cabaret of Eugene presents "Camelot," the play based on T.H. White's novel The Once

-
CANCELED due to Stay Home requirements. Youth baseball teams from all across Oregon will c...