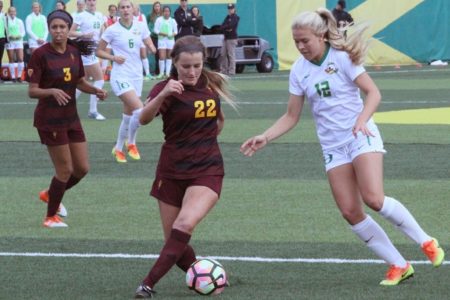 The Oregon Ducks relied first on their defense then found some much needed offense in sweeping Arizona and Arizona State in Pac-12 women’s soccer play over the weekend at Pape` Field.

After struggling to find the back of the net for most of the season, the Ducks broke the ice a bit with a 1-0 win over the Arizona Wildcats on Thursday to pick up their first conference win of the season.

Statistically, the Wildcats had the advantage in most categories, out shooting the Ducks 15-10 overall and enjoyed an 8-3 margin in shots on goal.

Maryn Beutler pounced on a loose ball in the box inside the 31st minute to give the Ducks the goal they needed for the win.

The offense came to life in a big way against the Arizona State Sun Devils on Sunday. Again it was Beutler who got the parade started with an assist from Marissa Everett, beating the ASU keeper to the near side in the fifth minute of play.

Bruner and Abby Morrow scored in quick succession in the early minutes of the second half for the Ducks with Sofia Chambers netting the final goal on a penalty kick.

After posting a non-conference mark of 6-2-1, picking up a pair of Pac-12 wins was a long time coming for head coach Kat Mertz.

“I know this team has the ability to do something special and we showed that in the first part of the non-conference schedule,” she said. “So it’s nice to be able to do that in Pac-12 play.”

Now 8-8-1 overall and 2-6-0 in conference, the Ducks face Washington and Washington State on the road before returning to host Oregon State in the season finale on November 4th First touch is set for 3:00 pm and the match will be televised by the Pac-12 Networks.

Out of the Pac – Week Nine

Lee Brice is set to release his latest single, “Memory I Don’t Mess With,” which will

Russell Dickerson will follow up his hit 2017 debut album, Yours, by releasing his sophomore album,