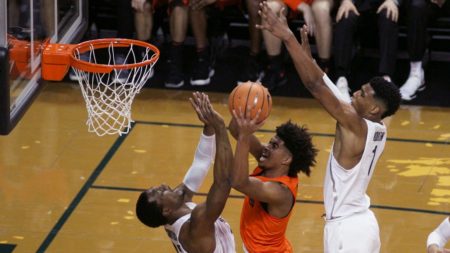 Elijah Brown scored a team high 20 points and Paul White added 17 to guide the Oregon Ducks to a 66-57 win over the Oregon State Beavers Saturday evening at Matthew Knight Arena.

“When he’s shooting it good it gives us a big dimension offensively,” Altman said of Brown. The senior transfer connected on 4 of 10 from the floor and was a perfect 9 for 9 from the free throw line.

Eighteen of Brown’s points came in the first half with the Ducks building a 21 point lead at 37-16 after holding Beavers to a single bucket during a six minute stretch late. Oregon State narrowed the gap to 16 at the break and then closed to within eight points on two occasions in the second stanza.

“The biggest difference was our activity on defense,” said Altman. “We had 17 deflections that turned into 17 points in the first half. In the second half, we had six deflections and got two points off turnovers. We got real stagnant offensively and had some bad turnovers.”

“The ball movement was good in the first half and luckily I was on the receiving end,” said White. “In the second half, we got stagnant. We didn’t have the same fire, but we were able to rally together. That is what we want to see from this team, sticking together in adverse situations.”

With only ten games remaining in the regular season, Altman is hoping to see his team play with more consistency and urgency down the stretch. “We have five weeks left in the regular season,” he said. “There needs to be a sense of urgency. We’re behind (where we want to be) … We’re not in a very good position and we’ll have to play our tails off to give ourselves a chance.”

Up next is the always challenging trip to face the Bay Area schools with the Ducks opening against California at 6:00 pm on Thursday (Pac-12 Networks) followed by Stanford on Saturday at 2:00 pm (Fox).

Oregon will return to Matthew Knight Arena to host Washington on Thursday, February 8th. Opening tip is set for 7:00 pm.