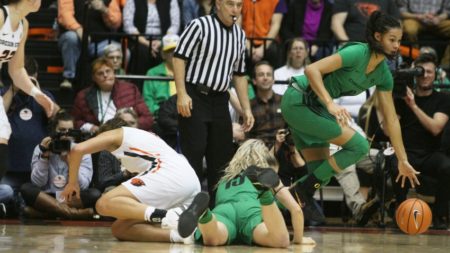 This game was just too good to end after 40 minutes of action.

Five more minutes of overtime was needed before Oregon State finally put the Ducks away in an 85-79 victory for the Beavers. It was OSU’s 12th straight Civil War win, but Oregon showed the Beavers that the Civil War will indeed be that from now on, a war.

Some blood, sweat and perhaps some tears were literally left behind on Ralph Miller Court in front of 6,704 inside Gill Coliseum Friday night. Fans from both sides got their money’s worth, but the home Beaver fans that went home happy.

With the loss, Oregon dropped to 6-1 in league play and 17-3 overall. The Beavers, with their biggest win of the season, moved to 5-2 in Pac-12 action and 14-4 overall. The two teams get to do it all over again on Sunday inside Matthew Knight Arena.

Oregon wouldn’t have been in the game if it wasn’t for Sabrina Ionescu’s career high of 35 points, including a 30-footer with 3.5 seconds left in regulation to tie the game at 75-75.

Even having a chance to tie it in the final seconds was almost a miracle in itself.

Oregon State had a huge chance to put the Ducks away in the final minute when Ruthy Hebard was originally called for a charge. The Beavers would have had the ball up three with 14 seconds left. But the officials looked at the replay and decided that Marie Gulich was in the restricted area and switched the call to a block.

Hebard made one-of-two from the charity stripe making it 74-72. Oregon quickly fouled Kat Tudor to send the sophomore to the line. The 77 percent free throw shooter missed the first one and then made the second one to give the Ducks life.

Oregon called timeout and coach Kelly Graves probably didn’t draw up a play where Ionescu shoots over two defenders from 30 feet away, but that’s what happened and Ionescu drained the clutch shot to silence the crowd for a moment.

But there were still 3.6 seconds left and Mikayla Pivec had a good look at the top of the key at the buzzer, but her shot was off the mark.

But in the overtime, OSU grabbed an early lead and never relinquished it.

The Beavers hit a free throw early in the overtime period for a one-point lead, but then the two teams traded possessions for the next two and a half minutes. Tudor, who scored her career high of 34 points, hit a jumper with 2:26 left to go up 78-75.

Ionescu hit her patented 12-footer to bring the Ducks back to within 78-77, but Gulich (28 points, 15 rebounds) made a lay-in and a free throw and the Ducks found themselves down 81-77 with just a minute left. Ionescu was inexplicably fouled while shooting a three. The potential four-point play would have tied the game, but Ionescu missed the jumper.

She went on to make two of the three free throws to bring the Ducks to 81-79 with 40 seconds left.

Instead of fouling, Oregon decided to play defense, hoping to get a stop and a potential game-tying or game-winning shot. But Katie McWilliams ended any hopes by nailing a three and getting fouled to give the Beavers an 85-79 lead with 12 seconds left.

The Ducks were playing catch-up for much of the game after the Beavers began the night on fire. Oregon State made its first eight three-point attempts to grab an early 28-17 lead after the first quarter.

Thankfully for Oregon’s sake, the Beavers cooled down letting the Ducks slowly climb back into the contest. OSU held a 42-36 halftime lead.

In the second half, Oregon threw a couple of different zones at the Beaver offense and that confused Oregon State. What were easy baskets and open threes in the first half, turned into contested jumpers and desperation shots to beat the shot clock.

Hebard’s lay-in with 8:40 left gave Oregon its first lead since the 7:46 mark in the first quarter. From then on, both teams traded leads throughout the fourth quarter to keep everyone in the building on the edge of their seats.

The Ducks will again try to snap OSU’s Civil War win streak Sunday night at 5 pm on the Pac-12 Network.

The post Ducks Fall To Beavs 85-79 in OT appeared first on DuckNews.com.