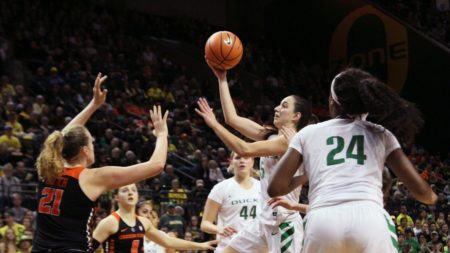 The smile on Lexi Bando’s face told the entire story.

She was just a sophomore at Willamette High School the last team Oregon had managed to win a Civil War game. Although she couldn’t contribute due to a leg injury, Bando watched her team dismantle the No. 18 Beaver team 75-63 in the 100th edition of the rivalry and it wasn’t even that close.

A crowd of 7,249 paid to see the Ducks blow the game wide open in the second quarter by outscoring the Beavers 28-11 to take a commanding 40-18 halftime lead. It was the second largest crowd to witness a women’s game inside Matthew Knight Arena and the 11th largest home attendance in program history. The biggest crowd for an Oregon’s game was for the arena’s first Civil War game back in 2011 and that was a sellout crowd of 12,364.

Ironically, that first game inside Matthew Knight Arena was also the last time the Ducks had beat their in-state rivals.

The Ducks used a variety of offensive sets and some different faces got into the scoring column. Unlike in Corvallis, it wasn’t just Sabrina Ionescu and Ruthy Hebard doing the damage.

Satou Sabally scored 21 points and Mallory McGwire held more than her own against OSU’s Marie Gulich on both ends of the floor. The sophomore from Reno scored 14 points and pulled down six rebounds. Defensively, McGwire made Gulich work for every one of her 16 points, but 12 of those points came in the second half when the game was pretty much decided.

Oregon State made sure not to let Ionescu go off again and the sophomore guard adjusted her game accordingly by creating open shots for others.

The Ducks hit 10 of their 15 shots in the second quarter, including five three pointers, to do in the Beavers after a relatively slow first quarter for both teams. Oregon led just 12-7 after the first 10 minutes of play.

Oregon managed to build up a 27-point lead midway through the third quarter and that was when the Beavers finally came to play. They started to hit threes and make some stops and eventually cut the deficit down to just 13 at 62-49 with 7:25 to play.

But the Ducks hit their first seven field goals in the final quarter and never let the Beavers back into the game.

Now Oregon will complete the first half of the conference season next week as the Ducks go to Colorado Jan. 26 and Utah Jan. 28. Both games will be on the Pac-12 Network.

Register Guard News: Crews work to pull up tank that may be source of oil sheen on Columbia River near Astoria