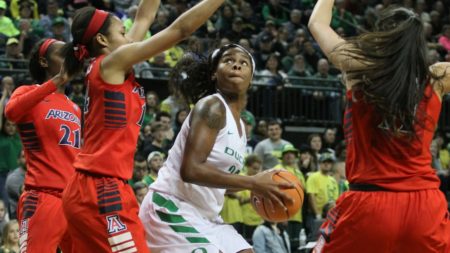 The Oregon Ducks picked up their eighth straight victory and have opened the conference schedule with five straight wins for the first time in program history after dispatching the Arizona Wildcats 62-44 Friday evening at Matthew Knight Arena.

Not that it was easy. Lexi Bando buried an opening three-ball to seemingly get the Ducks out of the gate on the right foot but the Wildcats (4-12, 0-5) scored the next 10 points while Oregon (16-2, 5-0) misfired on open looks and surrendered multiple second chance possessions through most of the first quarter.

The Ducks clawed back to take a 19-14 lead after one, but Arizona narrowed the gap to a single point by the half, trailing Oregon 27-26 at the break.

“We challenged the team at halftime. Thank goodness we did defend pretty well tonight for the most part. Because with a shooting night like that, whew, put us in a freezer to heat us up. That’s how bad it was.”

Sophomore guard Sabrina Ionescu’s 22 points and 11 rebounds led the Ducks in both categories. Ruthy Hebard was the only other player to reach double figures with 14.

Rebounds were near even with Oregon besting the Wildcats by one with 38.

“We couldn’t possibly shoot worse,” Graves said. “I mean seriously, 12-of-36. I don’t think we took a bad shot, a bad three all night. Those are shots we typically make. I don’t know what the deal was.”

After Bando’s opening bucket the senior sharpshooter was blanked until late in the fourth quarter.

Yet after pointing out all the shortcomings, Graves was quick to state “Well, we won the game. We’re 5-­0 (in conference play) for the first time in school history. That’s something to be proud of. I don’t want to make it all seem down. I thought defensively we were pretty on point when we needed to be. Even though we still weren’t making shots, we were starting to build a lead because we were defending so well.”

Nest up the Ducks host 18th-ranked Arizona State on Sunday. Tip off is set for 5:00 pm and the game will be televised on the Pac-12 Networks.