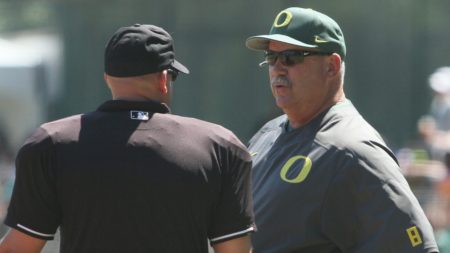 Forty one times George Horton has felt the butterflies of an opening day and he wouldn’t want it any other way.

“If it gets to the point I don’t feel that way, that would be the time to retire.” he said. “But I still love what I do.

In his 10th year with the Ducks, Horton and his squad launch the 2018 season  Friday afternoon at 10:05 against Loyola Marymount in the opening game of the Marucci Desert Classic in Las Vegas, Nevada. Indiana State and host UNLV round out the field.

Gone is last year’s ace David Peterson so Horton will be putting the ball in the hand of Matt Mercer on Friday night with Cole Stringer and James Acuna slotted to follow. Mercer went 6-7 last year with an ERA of 3.16.

Named an All-American as a freshman Kenyon Yovan will return as the closer though Horton has entertained notions of possibly moving him into the starting rotation if circumstances warrant. After eight games as a DH as a freshman, Yovan will continue serving double duty in 2018.

The rest of the staff will feature five freshman – Brett Walker, Peyton Fuller, Cullen Kafka, Hunter Breault and Tristan Duncan – with “electric arms” in the words of George Horton, along with junior Parker Kelly, Jacob Bennett and Isaiah Stolp.

A pitcher as a freshman, Ryne Nelson has converted to shortstop to take advantage of his 6’3” length and 97 mile per hour arm but will remain part of the back end of the bullpen if needed.

Gabe Matthews returns at first base as does Spencer Steer at third. To make way for Nelson, Kyle Kasser has moved to second.

The outfield will be manned by a pair of freshmen –  Johnny DeLuca and Evan Williams – along with redshirt junior Jakob Goldfarb.

“Both really gifted players,” Horton says of the two rookies. “Johnny DeLuca might be the most physically gifted position player we’ve had in the modern era, since I’ve been here. He’s arguably a five tool player. Switch hitter, has power from both sides of the plate, plus runner, plus speed on the bases. Good instincts and a really good arm. “

After missing all of last season with an injury, Goldfarb will also get innings behind the plate, sharing time with JC transfer Ray Soderman.

“We got some good chemistry.’ Goldfarb said. “… I think we’ve got a competitive group with a chip on our shoulder coming off the last two years not performing how we wanted to. Going into this year with some positive leadership is a real good sign for us … A lot of the sophomores got experience last year and they are coming back as veterans as far as we are concerned. We are counting on them for some leadership. We have a good core of seniors and junior who really know what they are doing.”

“Butterflies flying all around,” said Yovan of the opening game. “The focus of our team has been enhanced that last week. We are all ready to go. “

Picked to finish in the middle of the Pac-12 standings at sixth, much of Oregon’s success will depend on the veterans providing leadership and the youngsters living up to their potential.

“We think competitively they are all ready to go,” said Horton.  “We got some really good young arms that are going to get to pitch a lot.

“Hopefully I will be able to … be what I should be, a teacher. Understand this is a very difficult game; it’s a difficult step from high school to Division 1 and especially Pac-12 baseball. Hopefully by the time (conference play) rolls around they won’t act like freshmen anymore.”

“I think it’s unrealistic to really get a fair gauge on any until probably 20-25 games into the season. When the pitching settles in, the younger players that haven’t played a lot … start to feel more comfortable.”

Your workweek ends with a good 50% chance of rain.