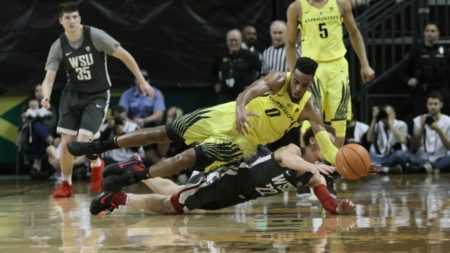 Oregon had the weekend it needed.

The Ducks completed the weekend sweep of the Washington schools with an 84-57 win over WSU Sunday night inside Matthew Knight Arena.

With the sweep, Oregon has won five of their last six games, 17-8 overall and 7-5 in league play, which is good for a tie of fourth place with Washington.

The Ducks are not quite on the bubble for the NCAA tournament, but should they somehow get a sweep next weekend on the road in Los Angeles, they’ll be sitting squarely on that bubble.

All that bubble talk would have burst if Oregon didn’t take care of business this weekend at home. The Ducks are slowly figuring out that playing defense can go a very long way towards victory. They locked down the Huskies for just 40 points Thursday and the Ducks held the Cougars to just 57 with a lot of those points coming from behind the arc.

Oregon pulled away late, but Ernie Kent’s team kept itself it the game by shooting 10-of-28 from behind the arc. Thankfully for the Ducks, they managed to hit 11-of-28 from three-point land as well as many lobs to Kenny Wooten for dunks.

Payton Pritchard lobbed most of those passes to Wooten. The sophomore wound up with a game high 19 points and 10 assists. Wooten, who is beginning to be a stat sheet stuffer, finished the night with 10 points, eight rebounds and three blocks.

One way to force your team to play defense is to put on the press and that’s exactly what Dana Altman did. Oregon’s press caused some turnovers and easy baskets. Washington State ended the game with 15 turnovers on the night.

It was still a seven-point game at 51-44 with 12:11 to go, but Bailey completed the rare four-point play and that seemed to take all the wind out of WSU’s sails. From that point on, the Ducks were able to eventually pull away from the visitors who are now 9-15 overall and 1-11 in conference play.

Both teams took their time in figuring each other out, but once the Ducks turned up the tempo, they were able to get some turnovers and easy buckets.

Washington State was able to slow the game down for much of the first half, which kept the Cougars within shouting distance. That and some nice shooting from long range. The Cougars nailed six treys in the first 20 minutes, including three coming from Carter Skaggs.

Oregon settled for shooting from long distance and although the Ducks hit five threes of 14 attempts, a lot of those shots came at the end of the shot clock. When Oregon realized it could turn up the defensive pressure to cause turnovers, the Ducks’ percentage from the field climbed.

The home team shot 52 percent from the field on 15-of-29 shooting and they went into the halftime locker room with a 38-28 lead. Pritchard scored 11 first half points and Troy Brown added eight at the break.

Now the Ducks will try to continue their last season roll with a tough road trip down south. First up is USC on Thursday. The Trojans defeated the Ducks earlier in the season 75-70. Tip is scheduled for 6 pm on ESPN2.

Photos: The Oregon Ducks triumph over the Washington State Cougars 84-57