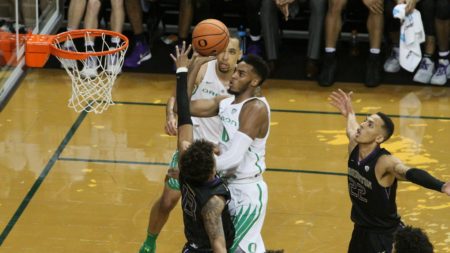 It’s amazing what can happen when the Ducks play well on the defensive end of the floor.

They found out the hard way last Saturday when they don’t in a 35-point loss at Stanford. But tonight against the Huskies, it was a completely different story.

Oregon held Washington to just 28 percent from the field and Kenny Wooten managed a career-high of seven blocked shots as the Ducks blasted their rivals from up north 65-40.

It was the freshman duo of Wooten on defense and Troy Brown on offense that was getting the job done for the Ducks. Brown scored 21 points, 16 coming in the first half. Wooten scored a career high of 12 points to go along with five rebounds.

Once Oregon figured out the Huskies’ 2-3 zone, the Ducks were able to get hot from the field, but it took them a while to see exactly where the weak spots were. Thankfully for Oregon, it was playing so well defensively that it gave the offense time to figure things out.

Wooten was erasing so many shots that the Husky shooters were becoming intimated just by his mere presence, which made them hesitant. Washington’s last field goal came at the 6:01 mark. From that point on, the Huskies made one free throw.

Payton Pritchard ran the offense to perfection with his 12 points and eight assists, a few of those assists on alley-oop dunks to Wooten.

This game was close at halftime as the Ducks held a 28-21 lead at the break. Brown was dominating the Husky defense with a variety of offensive moves to the bucket. The freshman made six of his first seven shots and showed the sky-high potential that earned him the distinction of being a five-star recruit.

Noah Dickerson was the only Washington player in double figures with 14 points.

These two teams will meet up again in the last game of the regular season March 3 up in Seattle. But before that, the Ducks have a handful of games to possibly put themselves back on the bubble for the NCAA tournament. Tonight’s effort was a nice step forward towards the big dance. Now Oregon has to make sure it doesn’t take two steps back should it lose to lowly Washington State on Sunday. Ernie Kent’s team is 1-10 in conference play and 9-14 overall after a huge 94-62 loss to the Beavers in Corvallis.

The Ducks square off with the Cougars on ESPNU at 5 pm.

Mostly cloudy, a slight chance of an afternoon shower, but noticeably colder for your Friday.