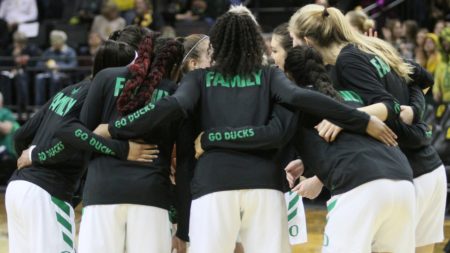 This is why it’s so difficult to beat the same team three times in a season.

UCLA and Oregon knew what the other was going to do on both ends of the court, but when Sabrina Ionescu found Odi Gildon all by herself under the hoop, Gildon didn’t flinch. Her lay-in with 28 seconds left gave the Ducks a 65-62 lead, but it wasn’t over. Oregon needed one more stop and it got it.

The Ducks denied Jordin Canada the ball and forced Japreese Dean to shoot a 25-footer at the buzzer that missed its mark and Oregon came out the winners in Seattle.

“I couldn’t be any prouder of my team. That’s an Elite 8 level game,” UCLA coach Cori Close said. “Oregon is going to make a deep run in the NCAA tourney.”

But before the Ducks go to play in the Big Dance, they will advance to the Pac-12 tournament championship for the first time in program history to face Stanford tomorrow.

“Every time we play UCLA, it’s one of those great games,” Oregon coach Kelly Graves said. “It was a blur on the offensive end. I’m not sure how we got open on a couple of those shots.”

Gildon’s field goal ended a 10-0 Oregon run. The Bruins were held scoreless for the last 5:05 of the contest. It was the second major scoring drought UCLA suffered. They could only muster up two points in the last 4:30 of the first half.

That’s almost a whole quarter with just two points and Oregon needed it because the Ducks were having a hard time scoring the ball on a consistent basis.

“Any time you play UCLA, you know they’ll make runs,” Graves. “The 13-2 run was the key to the game. We were poor in offensively in the first half. But we gutted it out. We held a high-scoring team down.”

Maite Cazorla’s running lay-in with just over a minute left in the game gave Oregon a 63-62 lead. It was the Ducks’ first lead since the third quarter.

Lexi Bando’s three from the right corner on the possession before brought Oregon to within one point of the Bruins. The senior from Eugene become the program’s all time three-point shooter as she went 3-of-5 from long range for 11 points.

Ionescu led the way with 17 points and Ruthy Hebard added 15 points, 13 rebounds and four blocks. Cazorla scored 14. The Ducks managed just six points from the bench and Satou Sabally was held to just two points. But the freshman was injured as she took a knee to the mid-section with six minutes left and didn’t return.

Whether the conference freshman of the year plays in the championship game or not, the Ducks will be ready to bring home their first tourney title in program history.

“The firsts for this program are coming fast and furious,” Graves said. “We’re definitely looking forward to the challenge.”

Oregon and Stanford are scheduled for a 6 pm tip-off on ESPN2.

The post Ducks Storm Back Late to Down Bruins 65-62 in Pac-12 Semifinal appeared first on DuckNews.com.

Increasing clouds and a bit warmer today with a slight chance of showers today.