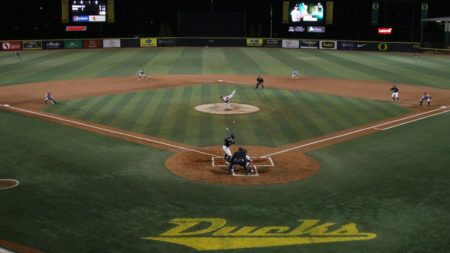 A five run fifth inning erased a 2-0 deficit and kick started the Oregon Ducks to a 10-4 win over Florida Atlantic Monday evening at PK Park. With the victory the Ducks claimed the four game series 3-1 over the Owls and improved their season record to 8-2.

Entering the series sporting a 7-1 mark, Florida Atlantic slipped to 8-4.

Matt Mercer ended up on the plus end of 2-1 pitching duel in Friday’s opener. The junior right hander struck out six, walked three and allowed three hits and one earned run in seven innings of work to lift his record to 2-1 on the year.

Spencer Steer led off the fourth with a single and moved to second on a wild pitch. Jakob Goldfarb’s single up the middle gave the Ducks a 1-0 lead.

Ryne Nelson walked to open the seventh and moved to second on Kenyon Yovan’s single. Ray Soderman moved Nelson to third with a sacrifice fly. A wild pitch scored Nelson and allowed Yovan to move to second but that would be all the damage the Ducks could do against Florida Atlantic’s Jake Miednik who went the distance for the Owls in taking the loss.

The visitors turned the tables in game two, blanking the Ducks 5-0. A pair of walks lit the fuse and after a pair of singles, a double and another single, the Ducks were fortunate to get out of the inning trailing 4-0 before more damage could be done thanks to a 6-4-3 double play. Tyler Frank’s eighth inning solo home run capped the scoring.

Cole Stringer (0-2) took the loss but the Oregon offense earned its share of the blame, wasting nine hits and stranding 11 runners on base, seven in scoring position.

Pitching by committee was the formula for success in game three for Oregon. Starter James Acuna teamed up with Parker Kelly and Kenyon Yovan to shut out the Owls 4-0, combining to yield six hits and a pair of bases on balls while striking out seven.

A pair of runs in sixth and the seventh was more than enough for the trio, with Acuna getting credit for the win.  Spencer Steer drove in a pair of runs and Gabe Matthews went 2 for 4 and drove in a run to pace the Duck offense.

In Monday’s finale, Cullen Kafka settled down after giving up a pair of runs in the top of the first and then picked up his second win of the year when the Oregon offense exploded for a five run fifth.

The Owls got a run back in the sixth and another in the seventh only to see the Ducks respond with three runs in the home half of the seventh and two more in the eighth. Ryne Nelson moved from shortstop to the mound to strike out three without allowing a hit in two innings of relief.

Oregon’s 1-2 hitters Kyle Kasser and Jonny DeLuca each had a pair of hits and an RBI; Spencer Steer, Daniel Patztlaff and Ray Soderman each drove in a pair of runs to power the Ducks to the 10-4 final result.

The Ducks’ home stand continues Thursday with UC Davis visiting PK Park for a four game series that runs through Sunday. First pitch is set for 6:00 pm on both Thursday and Friday with the weekend match-ups set to begin at 2:00 pm.