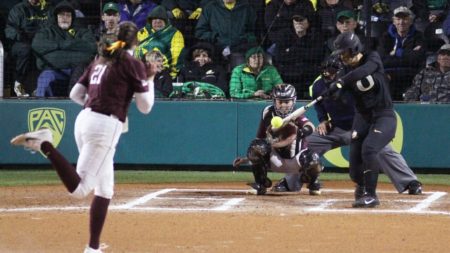 The 6th-ranked Oregon Ducks swept both ends of a two-game set Saturday evening at Jane Sanders Stadium, dropping Weber State 10-2 in a run-rule shortened opener, then blanking Montana 6-0 in the nightcap.

With the two victories Oregon’s season record improves to 21-4 on the year.

The bats came out early for the Ducks against Weber State. Mary Iakopo drove in a pair of runs with a double into the right-center field gap in the home half of the first inning and then Jenna Lilley and Shannon Rhodes each went yard in a seven run second.

Miranda Elish struck out 12 and allowed a pair of runs to pick up her ninth win of the season without a loss.

Neither Oregon nor Montana could get much going offensively in the early innings of game two. Again it was Iakopo who gave the Oregon offense a kick start in the fourth inning, tripling home Gwen Svekis and Rhodes. Mia Camuso followed with a single to put the Ducks in front 3-0.

That was plenty for Megan Kleist. The junior right-hander tossed her second straight no-hitter, fanning twelve Grizzlies on her way to her seventh win of the season.

The Oregon Invitational concludes with another double-dip on Sunday with the Ducks facing Montana again in the early game (12:00 pm) followed by Bryant in the finale at 2:30 pm.