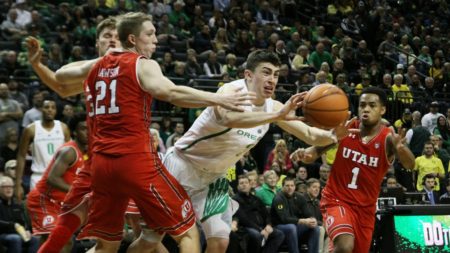 It takes a good two seasons at least for a top recruiting class to make an impact in football. Most incoming freshmen redshirt in order to build up their bodies and to learn the playbook.

But in basketball, a top recruiting class can make an immediate impact on the court and Oregon hopes to find how exactly how much of an impact in can have.

After a somewhat disappointing season last year that ended in a second round loss in the NIT, which followed a Final Four appearance, Ducks head coach Dana Altman put together an epic class of four and five-star players.

The class was so good that Pac-12 media members selected Oregon to win the conference this season.

Leading the class and making what could be the tallest Duck team ever is 7-foot-2 Bol Bol. He was rated as the No. 1 center in the country, but even with his size and length, Manute Bol’s son plays more like a small forward on the offensive side of the floor with a good touch from the outside and a nightmare for opponents on the defensive side.

Not only was Bol the nation’s top prep center, 247sport.com listed him as the nation’s No. 3 overall recruit and ESPN rated him No. 4 overall. He was also a finalist for Naismith High School Player of the Year and was a McDonald’s All-American. At Findlay Prep last season, Bol averaged 20.4 points, 8.2 rebounds and 2.4 blocks a game. In short, which Bol is not, he’s good. 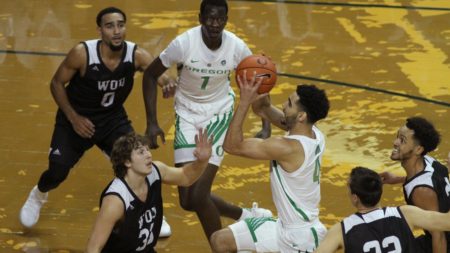 On any other team, Louis King might get all the headlines as that team’s top recruit. Also a five-star player according to all of the services, King at 6-9, the forward from Jersey City, NJ was listed as the No. 11 overall recruit by ESPN and the sixth-best small forward in the nation. Also a McDonald’s All-American, King averaged 15.2 points and 4.4 rebounds per contest.

However, his senior season was cut short due to an injury, something he’s still recovering from, but Altman believes King should see the floor sometime in December well before the conference season begins.

Also adding height to the roster is 6-9 Francis Okoro from Illinois and Nigeria. He was listed as a four-star recruit in the 2019 class before reclassifying for 2018. Okoro averaged 15.7 points, 12.4 rebounds a game for Normal West High. ESPN listed him as the No. 8 center in the nation. In his Duck debut, an exhibition with Western Oregon, Okoro scored 16 points and led with 10 rebounds.

Another four-star recruit is 6-10 Miles Norris, who was rated as the No. 3 power forward to come out of California and 19th-best power forward in the nation.

The Ducks will still have plenty of fire power from the outside, something four-star freshman Will Richardson is expecting to provide. The 6-5 point guard from Hinesville, Ga. was the ninth-best point guard in the nation, according to ESPN and the 39th overall recruit. Before transferring to Oak Hill Academy for his senior season, Richardson averaged 31.4 points, 8.6 rebounds and 5.3 assists as a junior for Liberty County (Georgia).

While the incoming recruiting class is outstanding, those freshmen will still be complimenting some really talented returners, led by junior point guard Payton Pritchard and sophomore center Kenny Wooten.

“We’ve got five guys who played for us last year and have experience, which puts us in a lot better place than we were a year ago,” Altman said.

Pritchard is the lone Duck that went to the Final Four in 2017 as a freshman and he followed that up with a solid sophomore season. The 6-2 point guard from Tigard was a Second Team all-conference selection last season as he averaged 14.5 points and 4.8 assists a game.

“We need Payton to have another good year. I think his year was undervalued last season,” Altman said. “Payton is a worker and he’ll be ready to go.”

Pritchard is on pace to becoming one of the top all-time point guard in Oregon history. He enters this season with 312 career assists, ninth in school history and he’s 10th in career three-pointers with 85 made.

Wooten became one of the nation’s top shot blockers as a freshman last year with his 92 blocks. The 6-9 center from Manteca, Calif. was on the Pac-12 All-Defensive Team. He led the conference in blocks (2.6 bpg), which was 15th nationally. Wooten already ranks fifth on the school’s career blocks list.

His offensive game (6.4 ppg, 4.5 rpg) was improving as last season went along and the Ducks are hoping Wooten will become a major offensive factor this season.

“I’ve been real pleased with our off-season. I think our guys have worked really hard,” Altman said. “Kenny has really improved his body. His confidence level on the offensive end is really going up. Last year he did a great job defensively, but offensively wasn’t much of a threat. I think he’ll be much more of a threat for us.”

Also improving as the season went along in 2017-18 was Victor Bailey, Jr. The sophomore shooting guard began last season as a role player, but when the year ended, Bailey was an important starter and a long range threat.

The 6-4 lefty from Austin, Texas had a typical freshman season where he started off hot, then had a lull for a 10-12 game stretch before finishing strong. Overall, Bailey wound up averaging 6.7 points per game, but in the NIT, he torched Rider for 22 points on 7-of-8 shooting from beyond the arc.

Senior Paul White returns for one more season to provide some depth and upperclassman leadership. White averaged 9.4 points and 3.5 rebounds a game. He, along with Ehab Amin, is just one of two seniors on the squad. Amin is a senior transfer from Texas A&M Corpus Christi where he averaged 17 points and 6.6 rebounds last season.

Sophomore Abu Kijab, who is now 6-7, will also provide depth and be a defensive specialist when needed.

With a top recruiting class comes expectations and some made-for-TV games, many of which will feature the Ducks. The season officially gets underway Nov. 6 with Portland State in Eugene before the Ducks participate in the 2K Empire Classic in New York Nov. 15-16 where Oregon will play Iowa and then either Syracuse or UConn.

They also have a rare in-season home-and-home deal with Boise State (Eugene Dec. 15, Boise Dec. 29) as well as a key road game at Baylor Dec. 21.

The conference season opens Jan. 5 with the Civil War in Eugene before hosting UCLA (Jan. 10) and USC (Jan. 13).

Oregon goes to Corvallis Feb. 16 and will host Arizona State Feb. 28 and Arizona March 2. The conference tournament is once again in Las Vegas March 13-16.