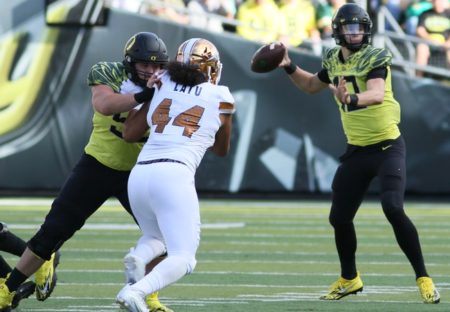 Oregon’s road woes have been well chronicled this season, but that can be forgotten for a week.

ASU comes into Eugene Saturday with control of its own destiny to win the Pac-12 South. The Devils need to beat Oregon and Arizona next week in order to win the division for the first time since 2013.

ASU is 4-3 in league play, but it does hold the head-to-head tiebreaker with Utah with a 38-20 win over the Utes two weeks ago. They have a three-game winning streak after a narrow 31-28 win over UCLA

In August, no one thought Arizona State would be in this position this quickly. They were picked to finish dead last in the South by the media before the season began.

Their off-season was full of turmoil with the firing of former coach Todd Graham and then they went way out of the box with the hiring of Herm Edwards. The former New York Jet Kansas City Chief coach had spent the last decade as an analyst on ESPN. He had never coached on the collegiate level before this season.

Edwards came into Tempe to run things his way, an NFL corporation way, and so far no one can argue with the early results.

Arizona State is second in the conference averaging nearly 30 points a game. It is also second in offense with 440 yards per game. The Devils are the epitome of a balanced offense. They average 195 yards on the ground and 245 yards through the air. They are the nightmare for an opposing defensive coordinator since they can’t plan for just one aspect of an offense.

Senior quarterback Manny Wilkins is finally coming into his own after three good, but not great, seasons. In his previous two seasons has the full-time starting quarterback, Wilkins had a bit of a problem throwing to the wrong team. In his sophomore and junior seasons, the Novato, Calif. native threw 17 interceptions.

Through 10 games this season, he has thrown just four picks.

“His development as a quarterback as been incredible,” Oregon coach Mario Cristobal said of Wilkins. “He makes the right decisions and the ball is out quick.

But for Edwards, it’s more than what’s happening on the field with Wilkins, but off the field as well.

“I’ve been happy with his leadership down the stretch against some difficult opponents,” he said. “This week, he had a ball returned back for  a touchdown, but what I like is his ability to come back from that. He takes us down on a long drive. That shows the maturity of a good quarterback.”

Wilkins’ favorite target, as it should be, is one of the best receivers in the conference and the country in N’Keal Harry. The 6-4, 215 pound junior from Chandler, Ariz has 62 catches for 928 yards (15 ypc, 93 ypg). He was a First-Team All-Conference selection from a year ago and will be a tough matchup for Duck cornerbacks Ugo Amadi and/or Deommodore Lenoir.

“At the receiver position, he’s about as good as you’ll get in the country,” Cristobal said of Harry. “He’s a projected top pick in the draft and you can see why. Last year he made some monster plays against us.”

Harry caught seven passes for 170 yards and a touchdown in the 37-35 ASU win down in the desert last season.

While the passing game is stellar, the Devils’ run game has been tough to stop. Eno Benjamin leads the conference averaging 130 yards a game as well as his 12 touchdowns.

At 5-10 and 210 pounds, the sophomore from Wylie, Texas is having a breakout type of season. He played sparingly last year as a true freshman, but his success shouldn’t come as a surprise. Benjamin was the 5A Player of the Year in Texas and was rated as the fifth-best tailback in the country. He tallied up 7,546 rushing yards and scored 111 touchdowns in his four years on the prep level.

On the defensive side of the ball, ASU falls around the middle of the pack. The Sun Devils are fifth in giving up 23 points per game, sixth in total defense (385 ypg), but they are just eighth in rushing defense (153 ypg).

The Extraction is No Longer a Perk for NRA Employees