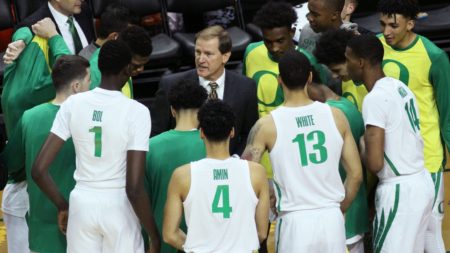 For whatever reason, Portland State has a history of giving the Ducks fits on the hardwood.

But in this year’s season opener in front of 8,212 inside Matthew Knight Arena, Oregon had a relatively easy time with the Vikings in an 84-57 win.

Last season, the Big Sky team from just two hours up I-5 came to Eugene and nearly pulled off an upset before going down 95-84, but the Ducks’ defensive effort was a lot better tonight.

After a slow start defensively, coach Dana Altman switched his defense from a man-to-man to a zone, which stifled the Vikings’ offensive attack. Oregon’s size and length made thins very difficult on Portland State. Penetration was nearly impossible and when it did get the ball to the rim, either Bol, Kenny Wooten or both were waiting.

Each was credited with three blocks on the night, which gave Wooten a career total of 95 blocks, good for fourth in Oregon history.

Bol wasn’t the only freshman making his Duck debut. Francis Okoro began his Oregon career with 10 points and six rebounds, along with Will Richardson, who added seven points.

Oregon features the tallest team in the conference with 7-2 Bol, 6-9 Wooten and 6-9 Okoro, so a lot of its shots are going to come from the inside.

That can’t be said of Portland State, however.

The Vikings put up 35 three-point attempts and made just five of them. They also just made 29 percent of their shots from the field (21-of-73).

In the first half, the Ducks took advantage of their height for some easy shots and baskets. Having Pritchard penetrate the Vikings’ defense almost at will didn’t hurt their cause either.

Pritchard finished the first half with 18 points and three assists to help Oregon shoot 61.5 percent (16-of-26) from the field and 10-of-12 from the charity stripe.

White went into the locker room with 11 points for the Ducks.

Oregon will take on Eastern Washington Friday, Nov. 9 for a 6 pm tip before its big trip to the Big Apple to take on Iowa Nov. 15 in the 2K Empire Classic.

Women’s Basketball: Oregon 115, Alaska-Fairbanks 36
Sabrina Ionescu scored her 11th career triple-double in the 79-point rout over the Nanooks way up north. The junior guard scored 18 points, grabbed 11 rebounds and dished out 12 assists in the season opener for the No. 3 team in the country.

Satou Sabally led the Ducks with 23 points and Erin Boley poured in 14 in her Duck debut. Ruthy Hebard, in front of her hometown fans, scored 12 points.

Oregon comes back home to Eugene Nov. 10 to take on Syracuse for its Matthew Knight Arena opener.

The post Ducks Sail Past Vikings, 84-57 appeared first on DuckNews.com.

Patchy AM fog, then mostly sunny but a bit cooler this afternoon.