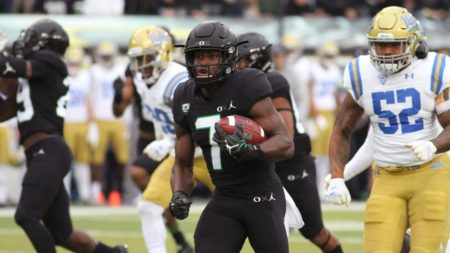 Oregon desperately needed a win and the Ducks got it.

Coming off a two-game losing streak where frankly the Ducks didn’t look good at all, they went back to basics and took advantage of UCLA mistakes to take a 42-21 win over Chip Kelly’s young Bruins team.

“Overall it was an improvement. We got back on track to some of the things we wanted to do and establish,” Oregon coach Mario Cristobal said.

UCLA committed three costly turnovers and Oregon scored off of all three of those miscues. And not just scored, but touchdowns, which turned out to be the difference in the game. The Bruins also committed 11 penalties and dropped five passes, making it even that more difficult to sustain drives.

Oregon on the other hand, managed to get its offensive game back on track after being mostly MIA in two road games. Justin Herbert went 18-of-32 passing for 264 yards and two touchdowns.

After holding the Bruins on downs, Herbert throw a bomb to Dillon Mitchell good for 67 yards and a 35-14 lead with 10:20 left in the game.

Mitchell had another big game as he caught eight passes for 156 yards and two touchdowns. It was so important that Herbert and Mitchell had big games since it was questionable either one of those would see any action. Both were in the concussion protocol during the entire week of practice leading up to the game.

“I did everything I could to get back early on in the week,” Herbert said of the concussion recovery. “I hurried to get into meetings and catch myself up watching film.”

It was also important for the Oregon offense to get the run game going once again and against a young Bruin defense, it was able to do just that. C.J. Verdell rushed 25 times for 90 yards and a score. Tony Brooks-James also managed to see some time and his 54-yard touchdown run with 5:54 left put the contest out of reach.

“We made a decision. We talked about it and decided enough was enough. We were going to put our foot in the ground. We are going to recommit ourselves to being the physical team we started the season as,” Cristobal said.

Ironically, it wasn’t the Duck offense that broke through first, but it was the special teams was Ugo Amadi returned a punt for 56 yards and the touchdown for the 7-0 lead. It was the first punt return for a touchdown for the Ducks since 2015.

“The way that punt return team set that up was impressive,” Cristobal said.

The special teams weren’t done in causing some havoc for the Ducks. Taking an old page out of Kelly’s playbook, Oregon lined up for a field goal only to have holder Blake Maimone find Jacob Breeland out in the flat all alone. All Maimone had to do was to make an easy pass to the tight end and watch him rumble 28 yards to the 1-yard line.

Verdell plunged in on the next play and it was 14-0 with 4:23 left in the first quarter.

Oregon made it 21-0 after Dorian Thompson-Robinson fumbled on his own 11 and Herbert found Mitchell three plays later for the four-yard touchdown.

The rout could have been on, but UCLA finally put a drive together without any costly false start penalties or dropped passed. Thompson-Robinson found tight end Caleb Wilson over the middle for a 63-yard touchdown.

Oregon took advantage of another UCLA turnover when Thompson-Robinson fumbled again and Justin Hollins recovered it. That was the end Thompson-Robinson’s night after his two fumbles and one interception. The true freshman wound up 9-of-23 for 135 yards and a score.

Again, Oregon took three plays to score and make it 28-7 on Cyrus Habibi-Likio’s seventh score of the season on just 14 carries.

With Thompson-Robinson on the bench, Kelly put in senior transfer Wilton Speight who is a more traditional pocket passer. The 6-6, 232-pounder gave the Duck defense some problems and one has to wonder how the game would have played out if he had started.

For the Ducks, now it’s on to Utah, that has suddenly turned into a game Oregon should probably win. The Utes entered the day ranked No. 15, but lost 38-20 at Arizona State. To add injury to insult, Utah starting quarterback Tyler Huntley broke his collarbone and will miss the rest of the season.

The kickoff time and television information for the contest at Salt Lake City hasn’t been set yet by the Pac-12.

Before the UCLA game, Kelly received a huge ovation from the Duck fans to show their appreciation for what he was able to do for the Oregon program.

“It was nice. These fans are awesome,” Kelly said. “My six years here were an unbelievable experience and it just solidified exactly what I thought. They’re special people who have a special passion for their school. It’s a really cool place.”

Rain this AM, then a 50/50 chance of showers this afternoon.

Computer Versus Tornado, Who Wins?

This is prime tornado season for most of the United States.Tornadoes do not happen very often