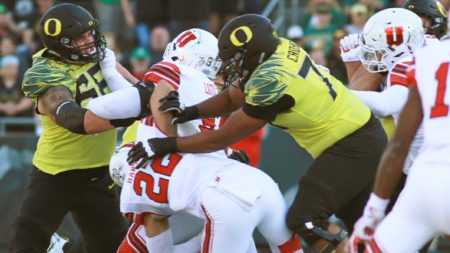 Traveling on the road in the Pac-12 is always a dicey proposition and Oregon is finding it out the hard way in 2018.

Oregon is having fits finding any offensive consistency away from Autzen Stadium and the trip to Salt Lake City wasn’t any different. The Ducks mustered up just seven first half points and couldn’t recover in a 32-25 loss to Utah in front of 46,275 inside Rice-Eccles Stadium.

After their third straight road loss, the Ducks fell to 6-4 overall and 3-4 in Pac-12 play. Utah managed to improve to 7-3 overall and 5-3 in conference play. The Utes now in first place in the South, but still do notcontrol their own destiny.

Utah still needs to defeat Colorado next week and then hope Arizona State loses at Oregon next week or at Arizona in two weeks in order to go to the conference championship.

Before the game, beating Oregon seemed to be a tall order for the Utes, who were going into the contest without their starting quarterback or tailback. Both quarterback Tyler Huntley and tailback Zach Moss are out for the season, so Utah went with true freshman Jason Shelley under center and he played like he was a fifth-year senior.

Nothing seemed to phase the Lone Elm, Texas native, who came into the game with 14 career passing attempts. Shelley completed a 3rd-and-14 play deep in his own territory on Utah’s opening drive and that gave him confidence the rest of the night.

That drive ended with a Matt Gay field goal, as did five of the Utes’ drives. That early score settled Shelley down and he finished the night 18-of-31 passing for 262 yards, no interceptions and two rushing touchdowns. He also ran in a touchdown midway through the first quarter to give Utah a 10-0 lead.

As for the other sideline, nothing was running smoothly. Oregon’s first drive ended thanks to a Justin Herbert fumble and that was just a sign of what was to come.

“We work hard at it combating it and it’s been a problem,” Oregon coach Mario Cristobal said of another slow start on the road. “It seemed like we snapped out if it better this time. By the time the second quarter rolled around we started generating some stuff. We were hoping to start fast and get some chunk plays. I thought after that we kind of sputtered, had some three-and-outs.

The Ducks gained a grand total of four yards in the opening quarter. Slow starts on the road is becoming an epidemic for this team, but unlike the games at Washington State and Arizona, Oregon was able to pull itself together to give itself a chance to win in the end.

Herbert did execute one flawless drive in the first half as he orchestrated a six-play, 75-yard drive that ended with a 34-yard touchdown pass to Dillon Mitchell to make it 13-7 with 10:23 left in the first half.

It wouldn’t be the last time that tandem would hook up for a touchdown.

Down 19-7, the Ducks took the second half kickoff and drove 75 yards in nine plays to score when Herbert hit Mitchell on an eight-yard slant for the touchdown.

The score was suddenly 19-14 Utah and despite a very quiet first half, Oregon was in the game.

The two teams traded possessions and then Oregon made what was the play of the night at the time. Adrian Jackson blocked a punt deep in Utah territory, giving Oregon a first-and-goal from the 3-yard line.

Herbert didn’t mess around. He found Travis Dye in the end zone on the first play for the touchdown. Oregon converted the two-point try and the Ducks had a brief 25-22 lead with 8:15 left in the game.

“We felt we had the momentum. We had been moving the ball and had scored. The punt block put us down there and we scored right away and got the two-point conversion,” said Cristobal. “I want to make sure I say that the guys played hard. They really played hard. It’s not fair to say this or that, or point the finger at anybody. We just didn’t get it done. We didn’t get it done. It’s progress in terms of getting things going after a rough start, but there’s no comfort in progress. We have to find a way to start better on the road and not shoot ourselves in the foot, especially against a good team like that.”

All night, the Oregon defense was bending and not breaking, forcing field goal after field goal. But they chose to break at a bad time.

It took Shelley just 1:27 to drive 60 yards and plunge the ball across the goal line with 6:38 left to go up 29-25. Tailback Armand Shyne was key on that drive as he was a huge part in breaking down the Oregon defense. He finished the game with 26 carries for 174 yards.

There was still plenty of time for the Duck offense to score again and take the lead. Although it wasn’t great in the second half, compared to the first half, the offense was running on all cylinders.

Herbert led the Ducks down to the Utah 45 where they faced a 4th-and-5 with just under five minutes left. Cristobal felt like it was best to go for it instead of pinning the Utes down deep in their own territory. Unfortunately for Oregon, Herbert’s pass to Mitchell went incomplete.

Herbert ended the night 20-of-33 passing for 288 yards and three touchdowns. Mitchell continued his incredible season with eight catches, 169 yards and two scores.

Utah was then able to drive down and kick yet one more field goal with just 11 seconds left to provide the final score.

Oregon will now come back to the friendly confines of Autzen where the Ducks have yet to lose this season. They’ll face a determined Arizona State team that still has its eyes on a Pac-12 South championship under first-year coach Herm Edwards.