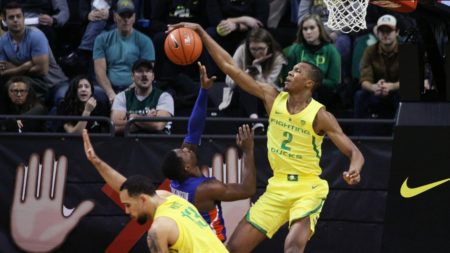 There wouldn’t be a mid-court shot at the buzzer this time.

When Boise State last made an appearance inside Matthew Knight Arena, the Broncos ended the Ducks’ 46-game home winning streak with a miracle shot to stun Oregon.

But that was then and this is now.

Oregon found itself offensively in the second half, erased a four-point halftime deficit and pulled away from the Broncos with a 66-54 win in front of 8,506 fans.

This was the first game of a rare home-and-home non-conference series as the two teams will meet again in Boise Dec. 29.

The Ducks improved to 6-3 on the season, while Boise State dropped to 4-6.

Even before the game, news occurred as it was announced that Bol Bol would be out for at least this game with an unspecified injury to his right foot. The big 7-2 freshman was wearing a boot and he will be reevaluated next week.

It took the Ducks 20 minutes, or the entire first half, to find their offensive game without their star center. It’s going to be tough to replace Bol’s 21 points and 9.6 rebounds per game and early on, Oregon definitely missed the big freshman’s output.

Boise State managed to take a 28-24 halftime lead, but once the Ducks were able to go back into the locker room and devise a new game plan, it was a completely different story.

Payton Pritchard led the Ducks with 19 points, 13 of those coming after halftime. Paul White picked a good time for his best game of the season, 14 points, 11 in the second half, to help out with the effort. Victor Bailey, Jr. came off the bench to score 13 as well.

The numbers weren’t so kind for the visitors, however.

Boise State shot just 35 percent from the field (18-of-51) and 61 percent from the free throw line (11-of-18). The only thing keeping the team from the Mountain West in the game was they made 7-of-16 from three-point land.

It didn’t help the Broncos that their two leading scorers, RJ Williams (14 ppg) and Justinian Jessup (12 ppg) were help to just two points each. Alex Hobbs, who came into the game averaging nine points per game, led Boise State with 21 points. He managed to hit five three-pointers.

It’ll be a big week for the Ducks as not only will they play Florida A&M on Tuesday and at Baylor on Friday, the fate of their season might rest on what a doctor says.

If Bol is out for an extended period of time, that will change the entire season outlook for a team that is the pre-season favorite to win the Pac-12. With him, they are at least a Sweet 16 possibility and perhaps more. Without him, the NIT seems a lot more likely.