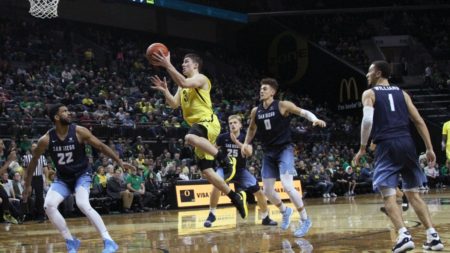 Oregon was down 29-20 to San Diego with 4:31 left until halftime. Things were looking bleak for the pre-season Pac-12 favorites.

But then the Ducks decided to turn up the heat on the defensive end and as a result, the Toreros melted away and Oregon came away with a 65-55 win in front of 7,191 inside Matthew Knight Arena.

Bol Bol led the Ducks with 20 points, nine rebounds and four blocks for good measure to help his team to improve to 6-3 on the season. San Diego fell to 8-3, but the West Coast Conference team has some impressive wins on its resume and could very well play in the NCAA tournament come March.

Payton Pritchard filled up the stat sheet with 12 points, six rebounds and seven assists. Kenny Wooten played another good game, especially on the defensive end. While he just blocked one shot, he altered countless others and grabbed six boards and added eight points to the effort.

There were plenty of rebounds to go around for both teams as field goal shooting was at a premium in the rare defensive struggle. San Diego shot 41 percent (20-for-49) from the field, but just 25 percent (7-of-28) from three-point range.

Oregon wasn’t that much better.

Once Oregon decided to turn up the defensive pressure to an 11, the Ducks went on an 11-2 run to end the half and was down just 32-31 as both teams headed to the locker room.

The second half game plan for the Ducks was obvious, keep up that pressure on the defensive end of the floor to set up some easy shots. It also created some turnovers. San Diego turned the ball over 16 times, while the Ducks committed just nine miscues.

Bol laid the ball in at the 16:57 mark to give the Ducks a 39-37 lead and Oregon never trailed from that point on. He scored 12 of his 20 points in the second half and many of those came off of little 10-foot jumpers in the key that San Diego just had no answer for.

Oregon’s biggest lead was the final tally at 65-55.

Things don’t get easier for the Ducks as they have just two days to prepare for a very good Boise State team in the first of a very rare home-and-home non-conference series with the Broncos.

It was just a little over a year ago the last time Boise State paid a visit to Eugene and Oregon may never forget it. Lexus Williams hit a shot from midcourt at the buzzer to stun the Ducks 73-70 to break a 46-game home winning streak.

Thankfully for Oregon’s sake, Williams was a senior and is no longer a Bronco. Boise State may wish he still was as it is struggling with a 4-5 record. But it is on a two-game win streak with victories over Central Washington and Alabama State.

The two teams are scheduled for a 6 pm tip televised on the Pac-12 Network. The Ducks and Broncos will meet again Dec. 29 in Boise.

The post Ducks Get Defensive in Win Over Toreros, 65-55 appeared first on DuckNews.com.