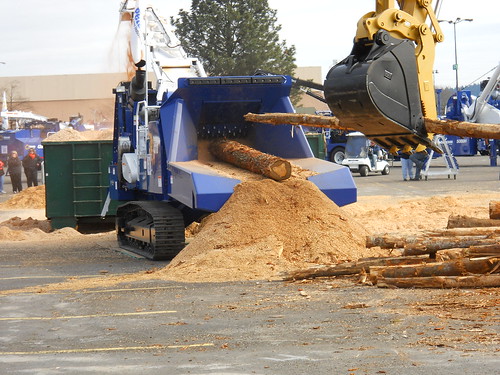 When plans for the first Oregon Logging Conference were being made, Franklin Delano Roosevelt was President, Civic Stadium and the Bonneville Dam were newly opened, and the Worlds oldest pair of Birkenstocks (9000 yrs) were discovered in Central Oregon.  Seventy Three years later all but President Roosevelt are still with us.

The show may have opened to snow and sub-freezing temperatures, but todays balmy 40+ degrees and mostly clear skies brought out the town including lots and lots of future logging industry CEO’s (kids) for the last day of the show.

Originally established for loggers and logging companies to meet and exchange the latest advances in logging technology and ethics, little has changed.   Much like farming, there are a handful of large firms enjoying various levels of success in the logging industry, but by and large the heart of the industry are still the many hard working family owned and small businesses; both of which were well represented at this years show.

United Industrial Equipment Corp., a pressure washer and waste water management company,  has attended the logging show for the last 20 years.  I asked Nate Larson, sales manager for UIEC how the show was for them.  “Attendance wise, it’s about the same as last year, but this year people aren’t just window shopping, they are either planning a purchase, or purchasing.”  Larson indicated that while there was a lot of interest in used and re-manufactured equipment, “We had more leads this year from the small fleet operators on water systems and big ticket hardware than we’ve had in the last 3.” Larson said.

“We also have a lot of customers who purchased from us more than a decade ago who stop in to say hello, and let us know that their original purchase is still running great. Something we’re happy to hear, but would love to see their businesses grow into some new hardware.  It’s starting to feel like there’s some hope of that happening.”

That seemed to be the consensus among most of the booths I stopped by.   Compliance based companies were everywhere.  From log book and permit tracking software to on-board scales from companies like Vulcan that help Log and Chip Truck drivers more easily keep their load at legal weight, avoiding fines and unnecessary maintenance on their trucks.

Speaking of trucks, the array of “big iron” haulers was impressive. There were restored antique trucks like the 1941 Mac “Christine” and a 1955 International Harvester displayed alongside brand new 2012 models.  A truck drivers toy store.

The real show however was outside.  Filling the entire 30 acre main parking lot was an awe inspiring array of giant tree handlers and loaders, automated milling and chipping machines, massive cranes and gaping mouthed loaders looking like some kind of big kids County Fair midway.  Watching an operator in a large tracked loader deftly picking up 3′ diameter logs, turning them on end and making a stack 15′ tall makes you wish you tried the Loader Simulater inside the pavilion.  No way was it as easy as they made it look.  Much of the equipment was familiar in design, but significantly updated over even a few years ago.  Terms like “Energy efficient”, “lowered emission”, “lower byproduct and higher utilization” were heard from most of the equipment vendors, not something the average Eugenian associates with the Timber Industry.

On the lighter side there were at least 3 chainsaw art booths and 1 very special display that I’m saving for its own story. Some of the carvings were incredible and whimsical, my favorite was the fisherman with the “fishing line” going back from the pole and becoming part of the rigging to the carvers tent.  Most of the kids it seems were fascinated by the 12′ tall Sasquatch carving, looking suspiciously like the guy in that suspicious photo we’re familiar with.   These however aren’t the chunky “Paul Bunyan” type of hobbyist carvings, some of them are as fine a rendering as a marble sculpture.  Some of them as dearly priced too.

The only thing missing from the midway atmosphere were the Funnel Cake and Fri-Jos vendors.  I  settled for a hotdog from the ubiquitous snack bar, albeit more like a food cart in a building than your traditional snack bar; sporting an eclectic diversity of menu items.  Truth be told I wanted a hotdog.  For little more than the price of a gallon of gas the 73rd Oregon Logging Conference was a chance to peek inside the tent, meet some of the people and see the signs of life in our Timber industry.  If you haven’t been, plan on attending next year.  Its an important part of Oregon’s living heritage, worth getting up close and personal.

Photos from the OLC: