A University Staple and a Really Good Burger: The Glenwood
by Everett Meadows, The Eugene Burger Blog

A friend recently described the Glenwood as a “Tier 2” restaurant.  It is not quite a “Tier 1” restaurant, or the type of restaurant that is an absolute must if you are visiting town for only a weekend.  Rather, it is something just underneath that: a restaurant that you should really give a chance if you are going to spend any sort of time in a town.  While this rating system is still not quite patent-ready, I am thinking that the third Tier would have restaurants that are perfectly salvageable but not anything special, and the fourth would be made up of the real dogs, but I digress…


I can’t say I disagreed with my friend’s, 2nd tier, assessment.  The Glenwood has not been a place I would likely put on a can’t-miss list, but I have taken plenty of visiting out-of-town friends and family there.  Between its campus location, attention to detail, and Tomato Cheese soup (more on this later), The Glenwood has earned its spot as a University and Eugene staple.  The food is great, the service is usually very good, and, as long as you avoid it on a Saturday or Sunday before 3:00, you can usually be in and out in about 25 minutes.

Still, I have never really considered the Glenwood a burger joint.  To me, the Glenwood is a breakfast place; it is the restaurant that I think about on a lazy sunday, when I consumed one (or twelve) too-many on Saturday (for the record: their Eggs Benedict are maybe the best in town).  I knew they had burgers, but have never before much had the inclination to order one.

Recently, however, I have been hearing more and more about the Glenwood’s burgers; I have received more than one email recommendation from readers, and even some from personal eugene-foodie confidants.  That, combined with the Glenwood being close enough to my daily goings-on, made the Glenwood ripe for the EBB treatment. 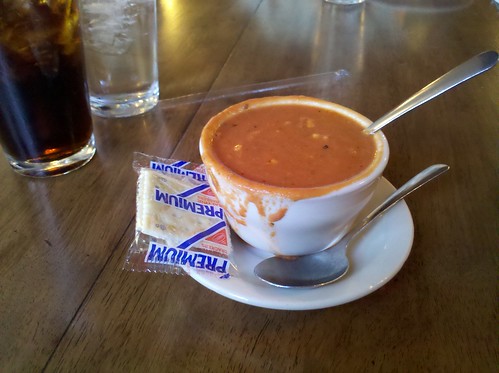 To begin this review, I want to get something out of the way:  The Glenwood does not serve french-fries. I think this is perhaps the reason I don’t see the Glenwood as a burger-joint.  I knew they didn’t have french-fries, but never really put any thought into it before today.  Upon ordering a burger you are given the choice of salad, home-fried potatoes, fresh fruit, cottage cheese, or soup.  Most people in my situation would, I assume, make a giant mistake when faced with this decision, and order the potatoes.  I am not saying the potatoes are bad, in fact I think they are relatively good, I even tasted some today so I could confirm this, but they are not the best option.

It is a little known fact that the Glenwood has one of the greatest soups in the whole wide world: tomato cheese.  Forgive me for not being impartial and bringing in past opinions to my review, but seriously folks, this soup is great.  It is not a complicated soup; in fact, some might consider it crude.  Simply, it is a no-frills tomato soup, with shredded cheese.

Something about the cheese makes it not melt completely, and the result is a wonderful, yet completely un-pretentious, masterpiece.  Just order it, okay?  I will leave it at that, because this is not the Eugene Soup Blog, as that would be stupid. 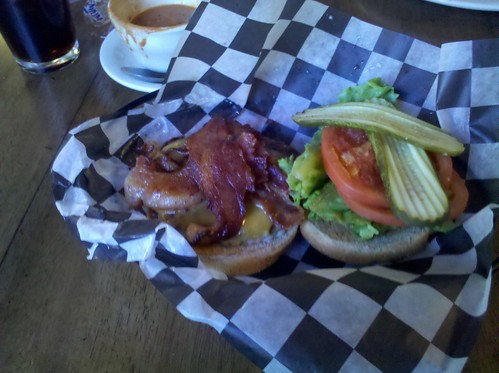 The burgers at the Glenwood are pretty amazing on paper.  Their beef comes from Oregon Natural Meats, a “locavore”-movement, Oregon-company that feeds all its cattle “upcycled” brewers grain (from local breweries), and dry ages all beef for no less than 21 days.  The stock burger-package at the Glenwood includes a 1/3 lb. patty, whole wheat bun, green leaf lettuce, tomato, pickle, and mayo.  And, at $6.50 – $8.50, they are priced really competitively.

As I have been out of the reviewing game for a couple of months, I decided to keep it simple and order a standard bacon-cheeseburger, or the “Willamette,” comes with Tillamook Cheddar and “thick bacon,” and goes for $7.75.

The burger is a good-looking creation, with fresh veggies, and a clean presentation.  It’s no greasy spoon burger, but it also isn’t an overdone fancy restaurant burger.  The bacon is, as promised, quite thick, and appeared to be cooked perfectly. 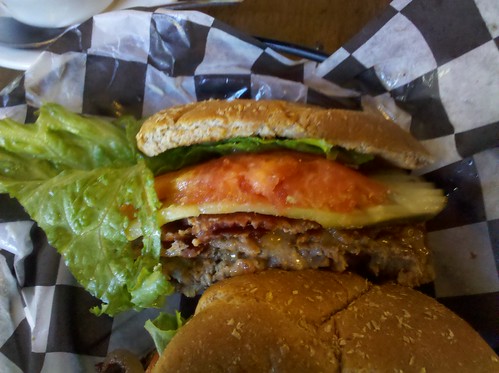 First-bite was my first indication that the Glenwood may have something pretty special with this burger.  I don’t know if it some un-mentioned seasoning, or the aging process employed by Oregon Natural, but the flavor of the beef was up there with any burger I have had locally.  The bacon was indeed cooked perfectly, not too crispy and not too soft, and the veggies were in perfect proportion to the meat.  I even really liked the pickles, which are typically a “meh…” item for me.

The only issue I have is with the whole-wheat bun.  On one hand, I really like the idea of whole wheat bread; it is so much better for you than white bread, and in many instances the flavor works better with the particular dish.  On the other, I am sort of a Philistine when it comes to my burgers and I like the processed clean flavor of white bread.  The bun tasted fine, so I will give it a pass, but it is likely the greatest source of any hesitation I have about this burger.

All things said and done, the Glenwood has a really great burger; likely, it is one of the best in town.  I would have to go back to some of the restaurants I have previously reviewed to say for sure, but I suspect that the beef was better than any of my previous entries.  I’d say it’s a little bit of a sleeper, and the Glenwood has too many things going on to really be considered a burger joint, especially with no fries, but this burger does nothing in my mind except put the Glenwood clearly in front of other local restaurants who are known specifically for their burgers (I’m looking at you Cornucopia).

Perhaps the Glenwood was already on some of your own “Tier 1” lists, and, as of today, it has pushed its way on to mine.

Reprint by Permission of The Eugene Burger Blog.

The Ultimate Guide to Pairing Burgers With Wine (INFOGRAPHIC)

The Ultimate Guide to Pairing Burgers With Wine (INFOGRAPHIC)

Kidsports Coaches Go to Court for Fistfight at Basketball Game

An Introduction to Water Activity in Green Coffee

The world of science in the coffee industry has, for the past few years, been experiencing

The Lonely Cupper: Reflections on 15 Months of Tasting in Solitude

It has been one year, three months and 10 days since my part of the world