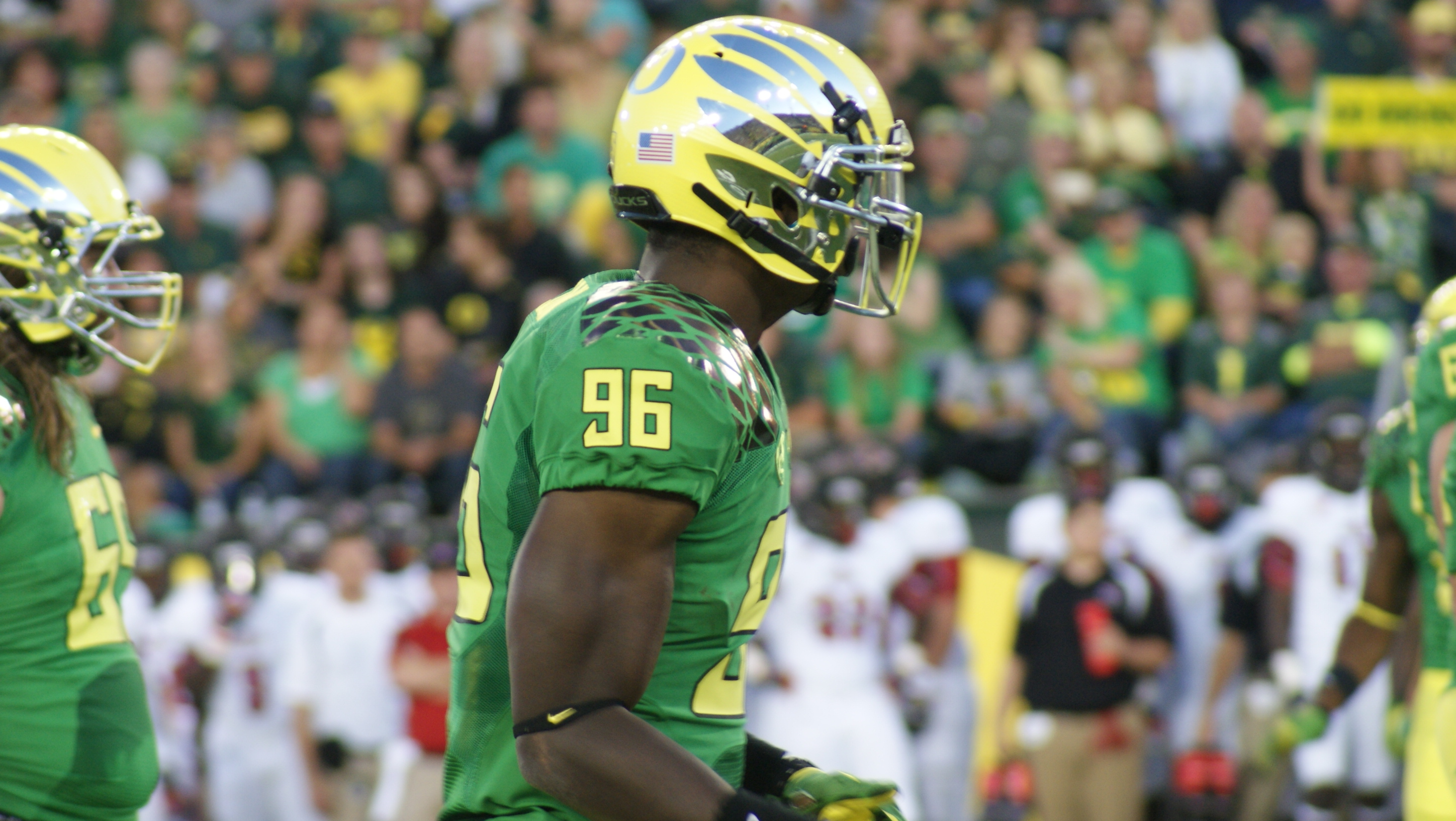 For three seasons, Dion Jordan terrorized opposing backfields as a hybrid defensive end and outside linebacker for the Oregon Ducks. Compiling 23.5 tackles for loss, including 12.5 sacks over his junior and senior season, Jordan transformed from an offensive convert to one of the most feared pass rushers in the college football.

Next Friday, Jordan will take a big step in his journey to the NFL, when he will fly to Indianapolis to work out at the NFL Scouting Combine, a series of physical and mental tests designed to help NFL coaches, general managers, and scouts determine the value of NFL prospects.

After Oregon’s 35-17 victory over Kansas State in the Tostitos Fiesta Bowl, Jordan underwent surgery to repair a torn labrum, denying him from participating in the 2013 Senior Bowl. An all-star game of sorts, the Senior Bowl is considered an important showcase for the best professional prospects college football has to offer.

“Because I wasn’t able to come to bowl games after the season, (the combine) is my opportunity to show all the GM’s, scouts, and coaches what I can do,” said Jordan in an exclusive interview with Eugene Daily News.

With his shoulder steadily improving, Jordan’s performance in the combine could be a major factor in determining just how early he is drafted. Widely expected to be a first-round pick, draft experts have projected Jordan to be picked anywhere from the top 5 to the end of the first round.

Lauded for his speed and quickness, despite being 6’7” and 245 pounds, Jordan’s unique athletic gifts have made him one of the combine’s most intriguing participants. Considered by some to be smaller than the typical defensive end and larger than the typical outside linebacker, Jordan sees his fluidity of position as a positive attribute.

“It’s not problematic to me at all, being mentioned as a guy that has the ability to play both positions, which can mean being very effective as part of the defense and causing a lot of problems for an offense,” said Jordan. “Being at Oregon, I’ve done it pretty much my whole career.”

And what a career at Oregon Jordan had.

A highly recruited wide receiver out of Chandler High School in Arizona, Jordan’s road to stardom took a detour when he suffered second and third-degree burns. Jordan was burned when attempting to turn off a vacuum that his friends were attempting to use to transfer gasoline from one of their cars to another. The injuries sent Jordan to the burn unit at a local hospital.

“When I got injured, it was a process I had to go through,” said Jordan. “The doctors told me that I was going to be alright, so I attacked every day with purpose. I didn’t take anything for granted.”

Then head coach Mike Bellotti continued to recruit Jordan, who committed to the program as a wide receiver. After redshirting in 2008, an ever-growing Jordan switched to tight end in 2009, though he saw most of his on-field action on special teams. In 2010, Jordan switched to defense, and has proven to be a versatile force – from rushing the passer to dropping back in coverage – ever since.

Now in Los Angeles participating in intensive speed and strength training for the draft alongside fellow former Ducks and draft prospects John Boyett and Kyle Long, Jordan will face a litany of evaluations and projections leading up to the draft on April 27.

“Being 5th year seniors, this is a point in our athletic careers we’ve been really looking forward to,” said Jordan, who could become Oregon’s first player to selected in the first round of the draft since Jonathan Stewart in 2008.

“It means a lot. Because of the way I carry myself, and approached every day, it rubbed off on a lot of guys,” said Jordan. “If I can maintain the same mentality and attack every day the same way I have been the last four, five years, that will hopefully take my NFL career a long way.”