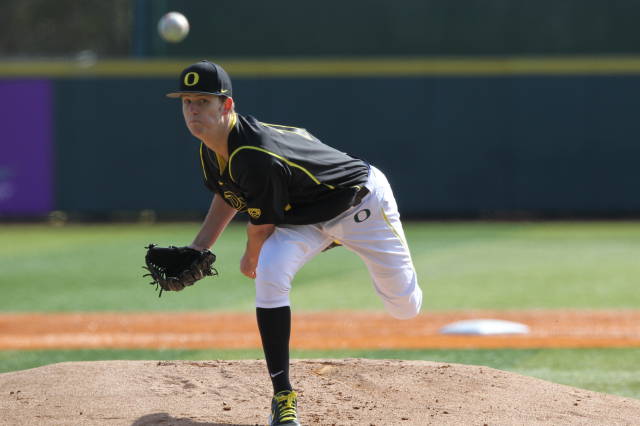 Cole Irvin was roughed up for one of the first times this season and the Ducks couldn’t stage a late-inning comeback to secure a series sweep over the USC Trojans, losing by a score of 5-3 at Dedeaux Field in Los Angeles, California.

Irvin, getting his fifth start on the season, surrendered runs in the first, fourth, and fifth innings en route to his first loss of the season.

The Trojans were the first team to strike after Kyle Twomey blanked the Ducks in their first inning. After a walk issued to Greg Zebrack, the Trojans’ leadoff hitter found himself all the way to third after a sacrifice bunt by Adam Landecker and a sacrifice fly by Kevin Swick. He would eventually come around to score on a wild pitch to give USC an early 1-0 advantage. Cole Irvin recorded his first loss of the season against USC. (Eric Evans/Goducks.com)

After the Ducks couldn’t manage to put any runs on the board in the second, third, or fourth innings, the Trojans struck Irvin for three runs in the bottom of the fourth, highlighted by a Jake Hernandez triple that cleared the bases and gave him three-RBI. USC had previously loaded the bases after recording two hits and a walk.

Oregon scored their first run of the game in the top of the fifth when Mitchell Tolman laced the first home run of his career off the right field foul pole, giving the Ducks some life while cutting their deficit to three with four plate appearances to go.

Unfortunately for Oregon, USC would get that run back in the bottom of the inning as James Roberts drove in yet another Trojan run off Irvin after USC put runners on first and third with two singles.

That would be the final run attributed to Irvin on the night, who finished the game after pitching 4 2/3 innings, giving up six hits, five runs (all earned), and two walks while recording no strikeouts.

Taking a 5-1 deficit into the eighth inning, the Ducks made things interesting late as they tacked on two runs in the top of the inning. After Conner Hofmann led the inning off with a single, J.J. Altobelli found a double into the left field corner, scoring Hofmann and cutting USC’s lead to 3. After advancing to third, Altobelli would come around on a sacrifice fly by Aaron Payne to pull Oregon within two with just an inning to play.

That would unfortunately be the only rally they had in them on the night, as Nigel Nootbaar came in for the Trojans and pitched a perfect ninth, securing the win for USC and taking what would have been a sweep away from the Ducks in their first conference series of the year.

Kyle Twomey recorded the win for the Trojans, throwing eight innings while giving up five hits and three runs (two earned) to go along with his five strikeouts.

Oregon will return home this next week and continue Pac-12 play against Arizona for a three-game series slated to start on Friday. First pitch is scheduled for 6 pm at P.K. Park.