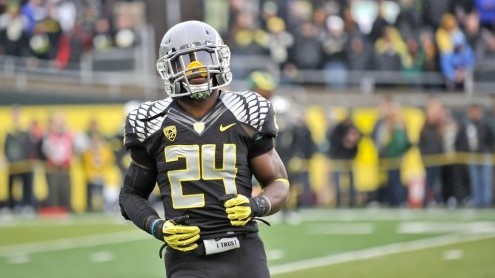 Barner was electric in his only season as a starter. (Alex Shoemaker/Eugene Daily News)

Oregon’s Kenjon Barner has signed a contract with the Carolina Panthers announced on Thursday. The Oregon Duck was a 6th round draft pick for the Panthers, 182 overall, and looks to continue the Panther’s success of their ground attack alongside DeAngelo Williams and fellow Oregon Duck alumnus Jonathan Stewart.

The Carolina Panthers ended the season with the 9th most rushing yards per game (130.5). Kenjon will not likely see much time behind Cam Newton due to the already strong running back core of Williams and Stewart but could be used as a scat back. He will also likely see time at Special Teams where General Manager Gettleman is excited about his play. In a press release Gettleman released this statement about Kenjon Barner:

[gn_quote style=”1″]“Kenjon has great speed and was a dynamic player on offense and special teams at Oregon.”[/gn_quote]

The financial terms of the deals were not released.

Barner will be the 3rd Oregon Ducks alumnus on the Caroline Panthers and will play against former Oregon Head Coach Chip Kelley in week 2 of the preseason on August 15, 2013 in Philadelphia.  He will also face former Oregon running back teammate and Super Bowl attendee LaMichael James and the San Francisco 49ers week 10 in the regular season in San Francisco on November 10, 2013.