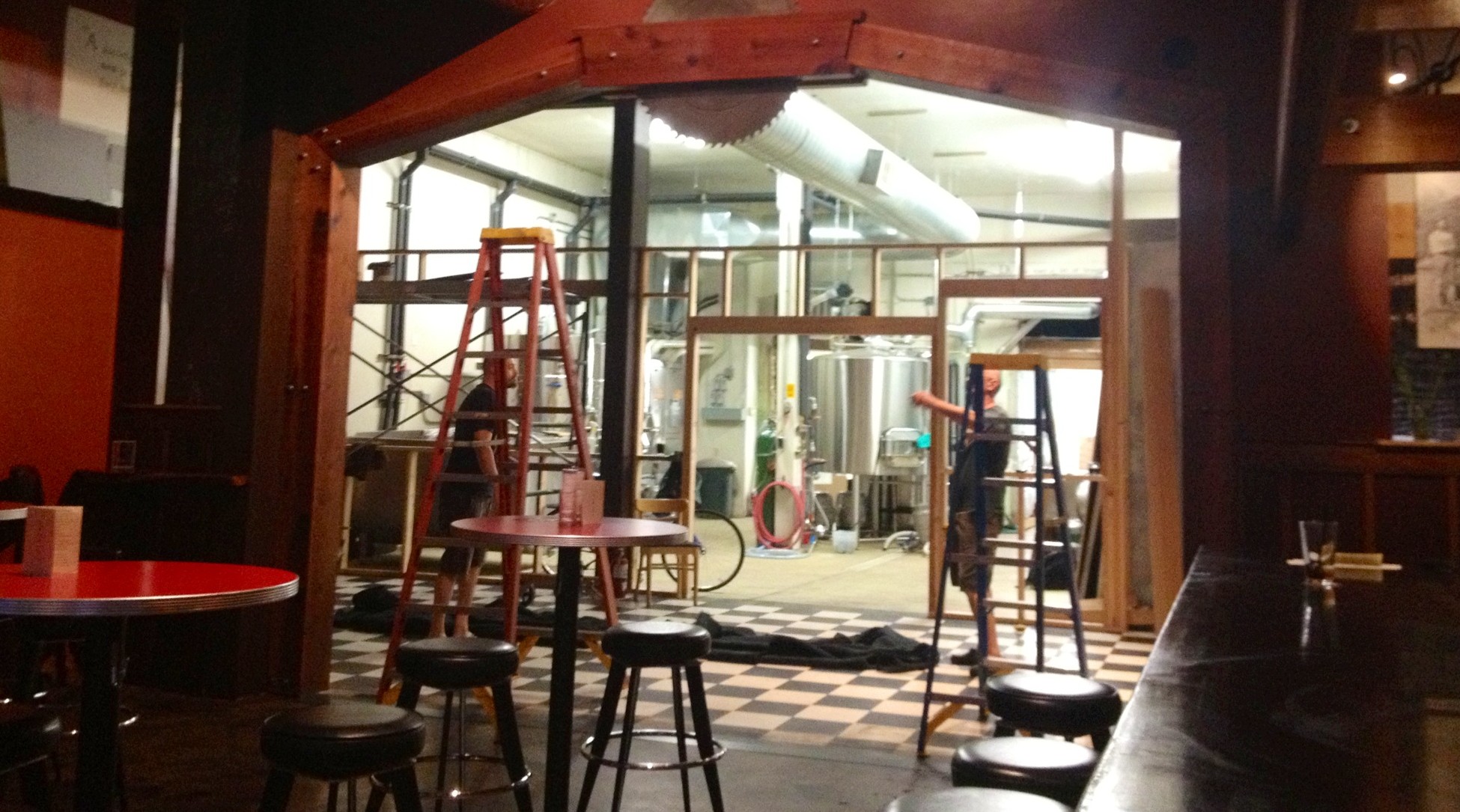 Plank Town Brewing was bustling on Tuesday night.  Not with patrons, although Plank Town has had their fair share of crowded evenings, no this was the staff.  Brewers, owners, kitchen staff and bartenders were putting the final touches on getting the building ready for their official grand opening on Saturday. Plank Town’s own brews are now on tap, and they do not disappoint.

The juxtaposition of busy workers and those relaxing and enjoying a beer was refreshing.  Even the rock music overheard playing from the kitchen added character and personality.  I first visited Plank Town when they first opened, and although the food was delicious, I never made a second trip.  This time I felt at home and at ease, and quickly found myself thinking I could easily become a regular.

Currently Plank Town has five of their own beers on tap, all brewed by their fabulous brewmaster Steve Van Rossem (who was previously brewing at Block 15 in Corvallis). My friendly bartender Michelle was kind enough to let me taste everyone (and even emailed me the spec sheets later).  It was hard to pick a favorite, so I recommend getting the taster tray.  Here’s what’s on tap:

Plank Town Extra Pale Ale. 45 IBUs, 4.6%. This beer is a light golden, classic pale ale, with a nice crisp hop forward flavor.  This beer would be great for someone looking for a drinkable beer, and would be pair perfectly with most of the food on the menu. Brussel Sprouts and Barts Best Bitter are a delicious combo.

B^3 Bart’s Best Bitter. 18 IBUs, 3.5%.  Although English-style Best Bitter’s aren’t the most popular style, this was my favorite on tap. I can’t guarantee that you’ll like it, unless you like Best Bitter’s.  The beer is well balanced between hops and malts with clear with a nice pale straw color. There may have a been a slight buttery taste, but I enjoyed the pint and would order it again. It also paired perfectly with the brussel spouts (and I realize I may have just listed two things you don’t like).

Foggy Scotsman. 25 IBUs, 5.2%.  In the style (surprise) of a Scottish-style porter, this beer hits the spot.  The aroma on this beer is rich and malty. It’s sweet with a smooth but slightly smoky finish.

Li’l Red Ryder. 50 IBUs, 5.4%. This rich and spicy Cascadian red ale is one that I suspect will become a house favorite. Good red ales are hard to find, but this one fit the uniquely NW style perfectly with a full body hop finish. I wish there had been a slightly stronger aroma, since it’s full of NW hops, but it’s always hard to tell in a taster glass.  If I were to order a burger or bigger meal- this would be the pint.

IPA. 60 IBUs, 6.2%. American-style IPA with UK malts and NW hops, specifically; Tomahawk, Centennial, Cascade, Chinede, Simocoe and Mosaic. The beer is a slightly sweeter IPA that’s balanced and delicious.  It’s sure to please any IPA fan in this IPA crazed town, and from what I hear, has already been selling like crazy.  You may have seen it on tap at the Bier Stein or 16 Tons. Plank Town now has a full menu of delicious food and brew.

Also on tap are two cask beers.  These cask beers are collaborations porters with Ted from Brewer’s Union in Oakridge.  Firkin Toad is the lighter of the two with a nice light and smooth body. Perfect cask porter. Simply delicious and smooth. The second, Warrior Trail, has a darker head, and is rich, sweet and malty, maybe even a little jammy, but has a full lingering flavor of nutty, roasted chocolate malts.

If you make it to their Grand Opening this weekend, June 22nd and 23rd, you may have the pleasure of trying a few more of their beers.  I’m looking forward to their Saaz-all Lager.  It’s a lager with Czech Saaz hops that sounds delicious. Also on tap you may find Plank Town Stout or ExSB. During the Grand Opening celebrations the Red Raven Follies are playing 6-8p on Saturday and Sunday.  On Sunday at 9pm, Betty and The Boy are playing at 9p. If you want to get a brewery tour in, stop by Saturday or Sunday at 1, 3 or 5p.

With the great new beer selection of Plank Town brews finally pouring from their taps and a new full menu, this Springfield brew pub and bar is definitely on my short list of new favorite places to enjoy a pint of craft beer.