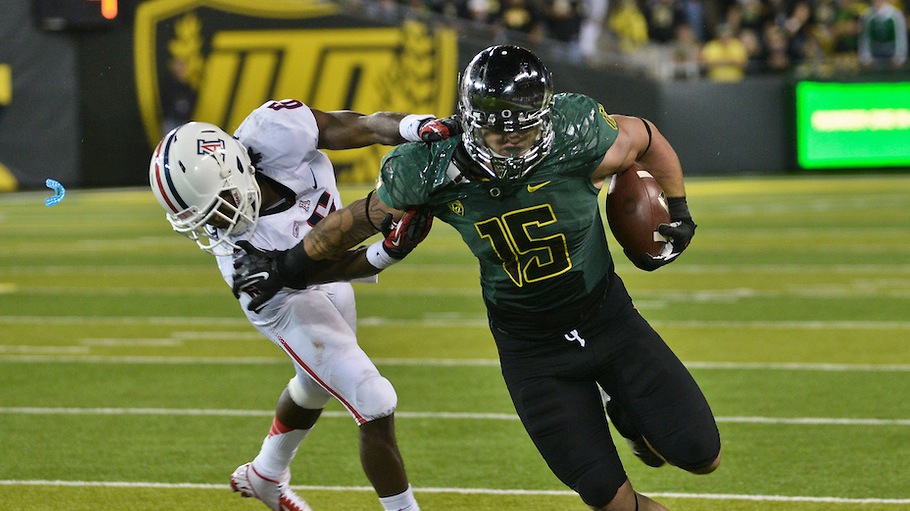 You can CLICK HERE for the full timeline of the Hernandez story.

With the Patriots releasing Hernandez and dealing with what could be a long-term loss to starter Rob Gronkowski, they’ll be looking for some new meat.

Now you’re probably wondering what Hernandez has to do with Eugene sports and why I’m choosing to talk about him in my column.

New England is known for having big, tough, hard-nosed tight ends. I happen to know one such college tight end who fits that description: Oregon tight end Colt Lyerla.

While Lyerla is entering his junior season and has not made a public decision on his choice of entering the NFL Draft early, I’m going to use common sense and assume he’ll be taking the first flight out of Eugene once the season is over. He’s one of the most athletically gifted players to ever sign with the Ducks and is an obvious first round draft pick talent-wise.

There’s also a video somewhere of Lyerla jumping out of a swimming pool. (IF YOU FIND THE VIDEO PUT IT IN THE COMMENTS BELOW)

[gn_quote style=”1″]Chip Kelly lined up the 6-5, 250-pounder at running back it was quite a sight. Lyerla was quite the weapon with surprising wheels for a guy that size, especially when it comes to his hops. He had vertical jumped 35 inches (second-best all-time among Oregon tight ends) and touched a team-best 11-3 in the jump reach. – Bruce Feldman[/gn_quote]

If you had any doubts about Lyerla’s hopping ability, take a look at those videos of him jumping onto a 62″ Plyo-box! I call shenanigans on that 35″ vertical Feldman claims.

Did you know that Oregon tight end Colt Lyerla actually is Bane from Batman?

Lyerla hasn’t had the productivity with the Ducks that many have expected of the former 5-star Oregonian high school prospect. As a freshman he only recorded seven catches for 147 yards (21.0 YPC) but connected for scores on five of them. As a sophomore he increased his productivity to 25 catches for 392 yards (15.7 YPC) and six touchdowns.

He has shown flashes of brilliance. He and quarterback Marcus Mariota connected on passes of 23 and 17 yards on the Ducks’ final drive in the first half of the Fiesta Bowl showing how easily he can find gaps in the secondary.

Another great moment was when Lyerla and former backup quarterback Bryan Bennett shared the ball for a touchdown run. CLICK FOR VIDEO

With the Ducks looking to air the ball out more in 2013, I expect Lyerla to double his productivity. Expect 40+ catches for 750+ yards and 10+ TDs.

There isn’t a defensive player in the Pac-12 that has the speed to keep up with him in coverage and the size to bring him down once he gets the ball.

Patriots QB Tom Brady is 35 years old and has a maximum of three more seasons at a pro bowl level. His top receiving target Wes Welker is 2,000 miles away playing catch with Peyton Manning in Denver. Patriots head coach Bill Belichick will want to add as many weapons for his signal caller as he can before the duo parts ways.

And ask yourself this: do you really want Tim Tebow starting in the NFL again? He just may be the New England Patriots’ new tight end. I think we’d all rather see Colt “Bane” Lyerla out there.