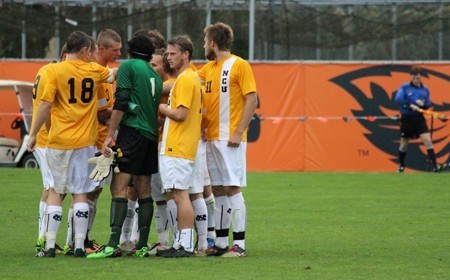 The NCU Beacons men’s soccer team (0-7), playing the program’s first ever match against an NCAA Division I team, fell 5-0 to the Oregon State Beavers on Friday despite holding the Beavs to just one first half goal.

A Mikhail Doholis goal in the 23rd minute opened the game up and the Beavers would be held goalless for the remainder of the first half. However, the game turned ugly when the Beavers scored four goals in a 19 minute stretch.

This disparity between the two teams is apparent in the 28-2 advantage for the Beavers, and considering that mark it’s a miracle that the Beacons only surrendered five goals.

“Considering we got to the half down just 1-0 without conceding too many really good scoring chances, it was a little disappointing to then give up four goals in the second half,” Beacons head coach Brett Bentley said. Offensively we saw some progress against a great team. My hat goes off to Oregon State. They are a well-coached team, very organized offensively. They should see a lot of success moving forward and I wish them the best of luck in the Pac-12.”

The Beacons will face Northwest University in Cascade Collegiate Conference action on Saturday afternoon with kick-off is scheduled for 4:00 p.m. at Mike Kelly Field in Springfield.