No. 21 Oregon Volleyball Falls to No. 2 Washington in Four Sets 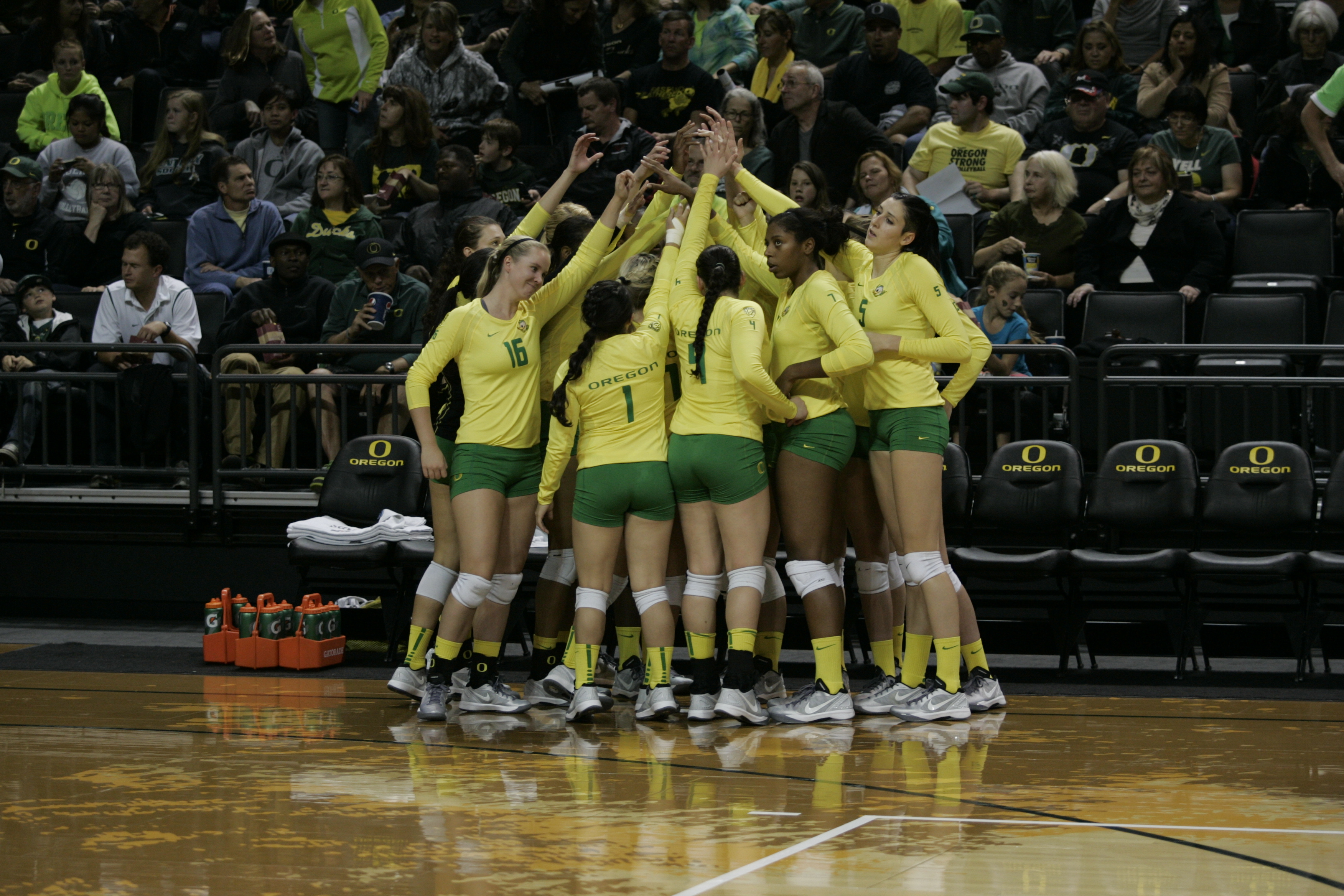 The No. 2 Washington Huskies defeated Oregon volleyball at Mathew Knight Arena in front of an enthusiastic crowd and harmonious marching band. Attendance reached 4,468 which is the 3rd most packed volleyball contest in Oregon history.

“The band was awesome and the students were awesome,” said Head Coach Jim Moore.

The crowd was raucous all night | (Gary Breedlove/Eugene Daily News)

In what has become a reoccurring theme for the Ducks, they got off to a slow start. By the time Moore burned his second timeout, Oregon was down 10-4. However, the Ducks responded with a 6-0 run of their own to tie it up. But the Huskies ended up winning the first set 25-23. With such a thin margin, the four to zero service error margin in favor of Washington was critical in ending Oregon’s 15 set win streak.

“We made a lot of errors in game one. Some of that stuff was just silly,” Moore said.

Once again, Washington got off to a hot start, taking a 5-1 lead early on in the second set. One of the highlight plays of set two was courtesy of Tatum Norton. She scampered all the way to the basketball court baseline to retrieve a deflected shot, which was followed by an emphatic kill by Liz Brenner. But the Huskies won set two 25-19 after putting on a dominating defensive performance highlighted by 6.5 blocks. On the other hand, Oregon only had a single block in each of the first two sets.

“We blocked very poorly tonight. You have to maintain pressure the whole time,” Moore said.

The Ducks played their best volleyball of the match at the start of the third set, mixing up setting schemes and placing kills all around the court. Martenne Bettendorf and Brenner really stepped up, each delivering a number of well-placed kills. Oregon had a 16-12 lead but the Huskies roared back with four straight. The madness didn’t begin until Oregon failed to take advantage of their first set point due to a service error committed by Ariana Williams. Then the Huskies managed to block an attempted Bettendorf kill on the Ducks second set point, had a kill of their own on Oregon’s third set point and a miscommunication dig by Oregon on the fourth resulted in another squandered set point. But on lucky number five, Bettendorf “killed” Washington’s shot at a sweep. However, the Ducks couldn’t carry momentum generated from the third set triumph into the fourth. Miscommunication and misplacement defined the final set. The Ducks got demolished 25-8.

“That was really disappointing after being really focused in game three and turn around and not be there,” Moore said.

Despite the loss a few silver linings can be drawn from the performance according to Coach Moore and Brenner.

“If there the second team in the country, we are right there,” said Moore.

Brenner added, “A lot of people played well and we were in every game.”

In particular, Brenner played exceptionally well. She led the team with 22 kills, which was half the amount of kills that the entire Washington team ended up with. Bettendorf added 15 blocks, one more than any husky. However the Ducks’ Achilles heel was blocking. Oregon only had four blocks compared to Washington’s 21.5.

Both Brenner and Moore attribute a lot of the team’s problems to experience.

In comparing this year’s team to last year’s team Brenner said, “Last year we were very consistent. We haven’t reached that level of consistency this year.”

Moore added, “It’s a maturity and leadership thing for sure.”

The Ducks next match will be against the Arizona Wildcats next Friday October fourth in Tucson, Arizona.