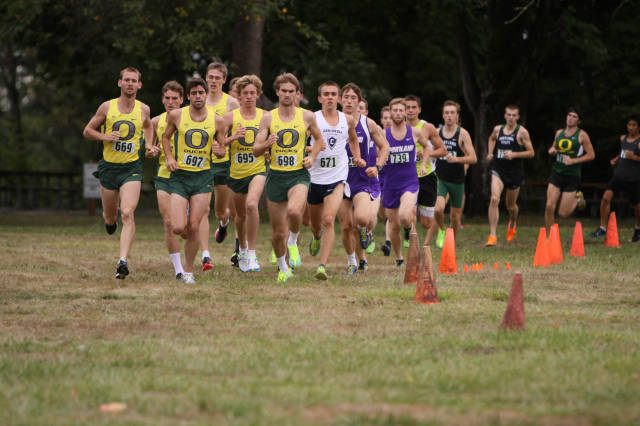 The men of the Oregon Cross Country team entered the Boston College XC Invitational ranked 12th in the nation, but freshmen Edward Cheserek and Jake Leingang finished 1-2 and the Ducks took first. The women survived a fall from Duck leader Sarah Penney and surged into second place.

“It was a good job by the women to overcome some adversity this early in the season and a great performance by the men to go out and bring home the victory,” head coach Robert Johnson told GoDucks.com. “What an outstanding job by our young Ducks Edward, Jake and Maggie Schmaedick wearing the “O” for the first time.”

In addition to holding the top two spots, the men used a powerful last 1,000 meters to put six guys in the top nine. It was some combination of the elite freshmen leading the pack and Oregon’s veterans keeping up and holding the pack together that gave the Ducks a huge margin of victory. The Ducks took first with 22 points, while Syracuse took second with 69 points.

It was a coup of sorts at the top of the men’s race as No.12 Oregon and No. 9 Syracuse were followed by No. 25 Providence, No. 8 Wisconsin and unranked Northwestern rounding out the top five.

The women’s race followed the rankings much more closely as the No. 3 Ducks took second behind No. 1 Providence. Junior Megan Patrignelli was the leader for Oregon and she picked up the baton right from Penney, taking sixth. The Ducks’ other outstanding freshman, Schmaedick, became the second Duck in the rankings at No. 11. Good teamwork from the Ducks, after Penney’s leg covered in blood from a large gash, was enough to beat out teams with better individual finishes for the second-place trophy.

With this first meet in hand, the men and women of Oregon return home for the the Bill Dellinger Invitational on Oct. 6 at Springfield Country Club.