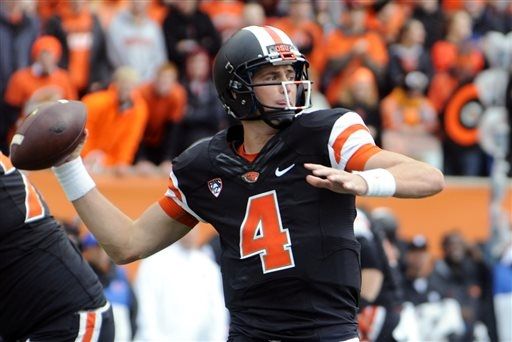 It wasn’t a perfect game, but it was certainly the most complete performance for an Oregon State Beavers football team (4-1, 2-0) that’s won four-consecutive games. And the key for the Beavers’ once again was junior quarterback Sean Mannion.

Mannion (27-of-52, 414 yards, six touchdowns and one interception) set an Oregon State record for most passing touchdowns in a game. While it wasn’t the perfect performance I was predicting, it’s certainly a testament to just how important he is to the team. The two biggest surprises of the game were without a doubt the Oregon State running attack and the Beavers’ secondary. Coming into the game as one of the worst units in the country statistically, both showed up against Colorado with dominating performances.

OSU combined for 120 yards rushing, which while it doesn’t sound impressive is nearly double the average on the season. Wide receiver Brandin Cooks, along with another 100+ yard performance catching the ball added 47 yards on nine carries (9.4 YPC) including a long of 23.

And as for the secondary. Oregon State’s defensive backs held Colorado starting quarterback Connor Wood to 14-of-34 for 146 yards, two touchdowns, two interceptions and an abysmal 3.5 QBR.

And equally impressive was the way the Beavs shut down Colorado receiver Paul Richardson. Through two games Richardson had games of 218 and 219 yards but was held to just 70 on Saturday.

Junior safety Ryan Murphy had one of the two Beavers touchdowns making it back-to-back weeks with a pick. His 27-yard interception return was the highlight of his four tackle day.

Moving forward the Beavers are now just two games away from becoming bowl eligible with arguably their two easiest opponents directly ahead. Following a bye week, OSU will go on the road to face Washington State and Cal before starting a brutal slate of games.

Oregon State closes out the season with games against Stanford, USC, Arizona State, Washington and this team from Eugene called the Ducks that’s had some success.