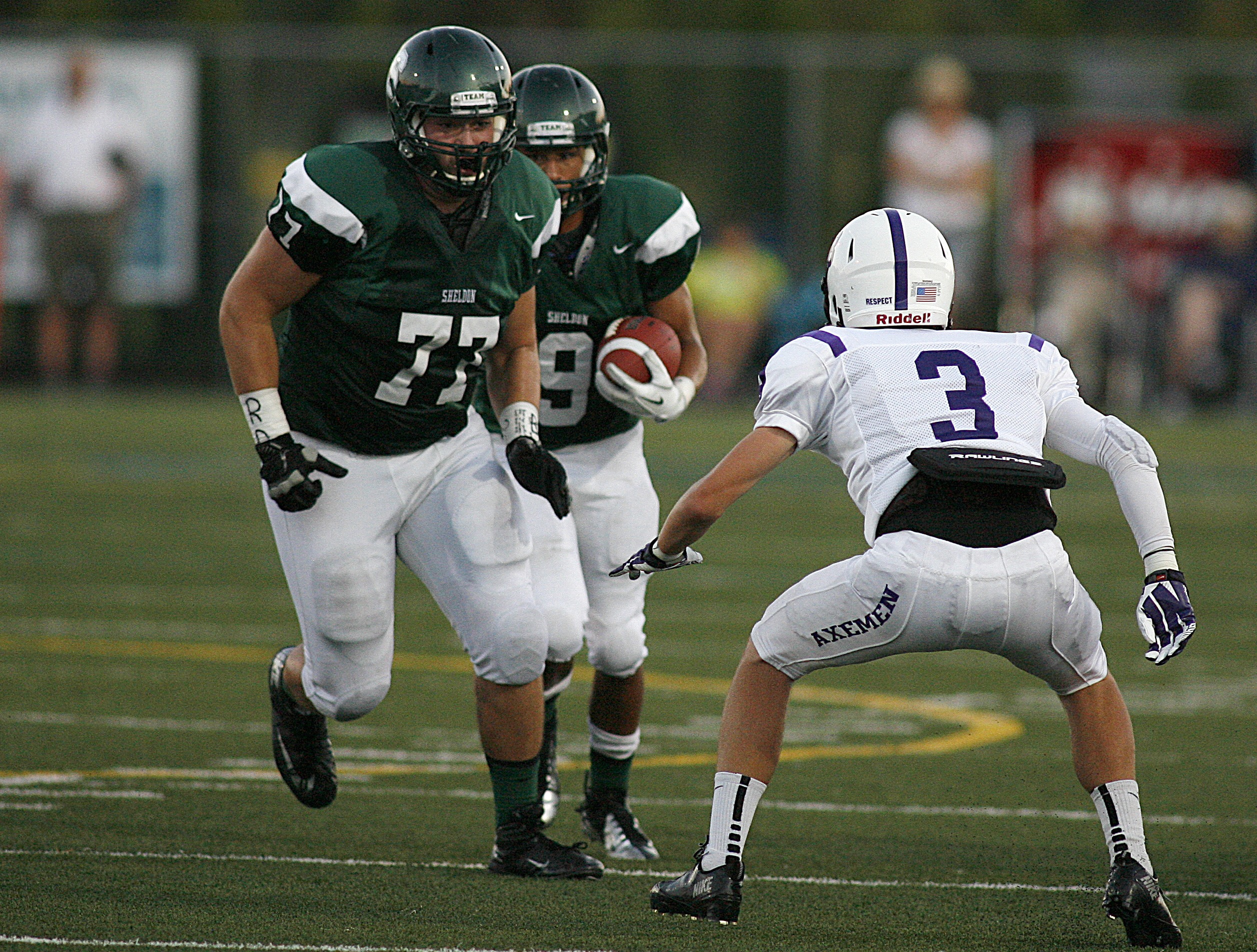 The Sheldon High football machine sputtered in the first half of its Class 6A first-round game against Lincoln on Friday night, but the Irish rediscovered their dominant ways with a 28-point third quarter to dispose of Lincoln, 56-28. The No. 4 seed in the 32-team 6A playoff tournament, Sheldon (8-2) remains on track to defend its state championship and will play host to 13th-seeded Tualatin (7-3) next Friday in the second round. “We were flat as a pancake,” Sheldon coach Lane Johnson said. “If our kids don’t learn from this, we won’t be playing for much longer. There was no enthusiasm, no run to the ball, and I have to tip my hat to Lincoln because they played hard.”

The Cardinals (2-8) entered the game as the 29th seed, so Sheldon was favored to win the game. Yet in the first two quarters of play, Lincoln kept pace with Sheldon, entering halftime tied 21-21. Lincoln never trailed in the first half and scored on two big touchdown passes, one for 57 yards and another for 63, and on a short 2-yard run after a 55-yard drive. At halftime, Lincoln quarterback Quentin Lake had completed 12-of-17 passes for 232 yards and two TD passes, while receiver Nate Ostmo had six receptions for 119 yards and a TD.

After each Lincoln score, though, Sheldon replied with TDs of its own, never allowing the Cardinals a chance to extend their lead. The Irish scored on two TD passes by quarterback Joseph Kuehn and a Yadie Dunmore 4-yard run. While they scored on all but two of their possessions in the first half, the Irish needed something to change if it was to overtake the game.

Sheldon found its answer on the first play of the second half after it received the opening kickoff. The Irish received excellent field position after an unsportsmanlike penality by Lincoln put Sheldon on the Cardinal 41-yard line. That mistake was only compounded when Lincoln played only 10 players on the first play from scrimmage. Dunmore took the hand-off and scored on a 41-yard run.

“We went in at half time and got together as a team, and then we came back strong,” Kuehn said. “(Dunmore’s run) was good for our confidence. More importantly, though, was that we got a quick stop on defense after that.”

The Irish followed Dunmore’s opening TD run of the second half with three more scores: a 2-yard TD run by Dumore, a 35-yard TD pass from Kuehn to Mitchell Herbert after Sheldon recovered a Lincoln fumble, and a 49-yard punt return by Kellen Strahm.

Kuehn completed 13-of-19 passes for 185 yards, four TDs and one interception. Herbert caught eight passes for 70 yards and two TDS, while Strahm added three receptions for 69 yards and a TD reception. Peter Wood caught two passes, including one TD for Sheldon. “Our kids are capable when they’re dialed in,” said Johnson, Sheldon’s coach. “We played exactly the same defense in the second half. The difference was that we weren’t dialed in to play.”

As well as the offense played, Sheldon’s defense also turned a corner in the second half. The Irish allowed just one Lincoln score in the second half and prevented the Cardinals from running the ball effectively. Lincoln finished the game with 20 total rushing yards on 29 carries. The inability to run the football was the biggest surprise to Lincoln coach Adam Grimes.

“We couldn’t get anything going,” Grimes said. “The second half came down to a five-minute span where they score, we go three and out, they score again, and all of a sudden they’re up two (touchdowns) on us. That changed our plan. They did a great job of grinding it out…When you’re playing the defending state champion, you have to play perfect, and we didn’t play perfect.”

Lincoln’s top two receivers, Ostmo and Jaray Kindell, each caught nine passes and each had 153 yards. While Ostmo finished with two TD catches, Kindell had one.

One notable streak for Sheldon was extended with Friday’s win. The Irish have now won 14-consecutive, first-round playoff games. The last first-round loss the Irish suffered came in 1999. Looking ahead to Friday’s game, Sheldon has a streak of seven-straight wins in the second-round of the playoffs.