Ducks Come From Behind in OT to Defeat BYU 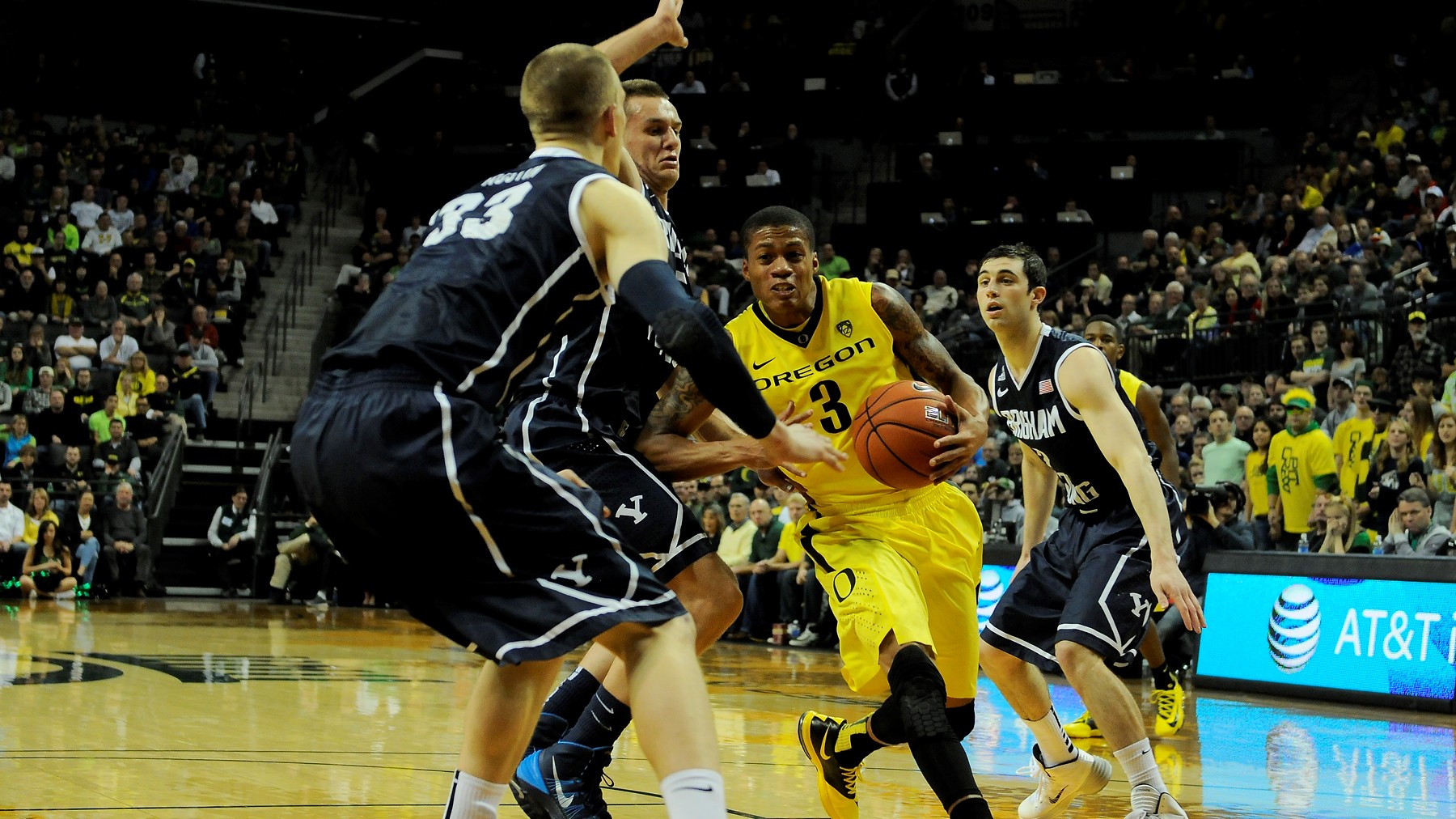 The Oregon Ducks outscored the BYU Cougars 100-95 in an action packed thriller at Matthew Knight Arena in Eugene, Ore. The high-octane offenses were true to form, each scoring early and often. Jason Calliste and Joseph Young carried the Ducks all night, scoring 31 and 25 each and 56 of UO’s 100 points.

BYU’s offensive methodology against the Ducks can be described in three words: attack, attack, attack. Off of UO misses or makes, the Cougars would race to the other end, attempting to score as quickly as possible. The Ducks defense was often unable to get into position and allowed a ton of open looks in the paint and around the perimeter.

UO head coach Dana Altman’s decision to press for nearly half the game caused BYU to turn the ball over some, but it also increased the tempo, which favored the Cougars for much of the game.

Like Oregon, BYU had multiple perimeter players who could consistently break down the opposing defense. But unlike UO, it had big and physical big men to complement the flashy perimeter players. The Cougars out-rebounded Oregon 61-50 on the night. Star Tyler Haws led the way for BYU, playing sensationally on the offensive end all night long. The guy made step-backs, back cuts, three-pointers and penetrated the UO defense at will to score 32 points. His partners in crime in breaking down the Duck defense were Matt Carlino and Kyle Collinsworth, who both finished with 15 points.

On defense, BYU played in somewhat of a matchup zone, designed to protect the paint at will. The Cougars closed off the paint to UO, but opted to give up a ton of open three-pointers. Oregon shot 20 three pointers in the first half, but only shot five free throws and only grabbed five offensive rebounds. The Cougars held a 47-41 lead after the break and stayed ahead throughout most of the second half.

In fact, up until the final minutes it looked like the Cougars had the Ducks dead to rights.

After two straight Calliste turnovers with about 2:30 remaining and BYU up 83-76, UO’s full court pressure finally started paying dividends. They began to force turnovers and cut into the BYU lead.

After a Young three-pointer and a midrange jumper from Moser off of an out of bounds play, the score was tied 84-84. Then Johnathan Loyd penetrated to the hoop and dished the rock to Elgin Cook, who pump faked and drew a foul with 1.8 seconds left.  However, the Duck forward missed a pair of free throws that would have put the Ducks comfortably in the drivers seat to win the game. Instead, the game went into overtime. In OT with Oregon down one, Haws hit a step back jumper. However, Young retorted with a three in the corner to tie the game up at 92 with 2:52 left. Then with 1:00 left and the Ducks down two, Cook made up for his missed free throws by converting a lay-in after grabbing an offensive rebound. Then Moser drew a pivotal charge with 52 seconds remaining, which was followed by a Damyean Dotson lay-up. The bucket gave Oregon a two-point lead, its first lead since the score was 2-0. After BYU missed some opportunities and UO made a few free throws, the Ducks came out victorious. Despite being out-rebounded and outshot 40 percent to 47 percent, the Ducks were able to reach 11-0 for the first time since the 2006-2007 season because they forced more turnovers and consequently had nine more shots than the Cougars. The Ducks are also now 2-0 in OT games this year.

Besides Young and Calliste, Moser and Dotson were the other two Ducks to reach double figures. Dotson scored 15 points and kept the Ducks in it for much of the second half, euro-stepping and slashing into the lane for high percentage opportunities. Moser added 12 points and nine rebounds. On the other end of the spectrum, BYU must be frustrated after losing to its fourth ranked opponent of the season, despite being in control for almost the entire game.

The Ducks amazingly scored 100 points without a single field goal from its two point guards, loyd and Dominic Artis. The two were a combined 0-8 from the floor.

Oregon finishes off its non-conference schedule against Morgan State on Sunday Dec. 29 at Matthew Knight Arena.