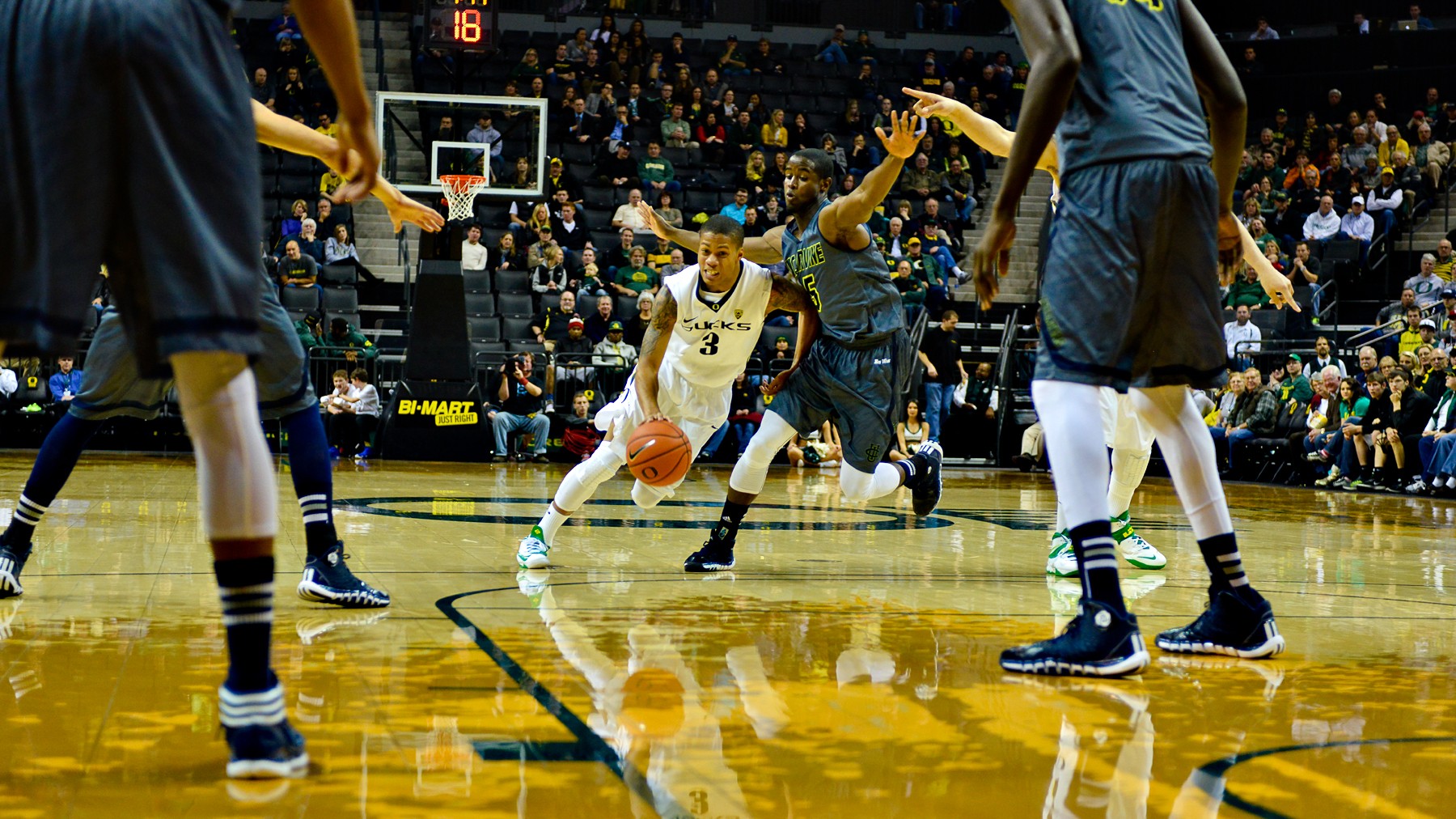 Two point guards, one shooting guard, one power forward and a player so versatile, putting him under a positional box would be insulting: This was the Miami Heat’s lineup in the closing minutes of its fairly competitive 101-95 victory over the Los Angeles Lakers on Christmas day. The two-time defending champion Miami Heat have mastered the art of relativity. In a blink of an eye the team can shovel out a big lineup with the likes of Chris Anderson, Chris Bosh and Lebron James playing at the same time. The next second, cerebral point guards Mario Chalmers and Norris Cole can check in to run opponents in circles with speed and three’s.

You wouldn’t think a little up and coming college team that hasn’t made it to the final four since 1939 could mirror a potential NBA dynasty. But for the Ducks this season, that is exactly what they have done and should continue to do.

The comparisons between the two teams aren’t completely comprehensive, but they are telling. Both teams prefer to play small, run up and down the floor, shoot as many three’s as possible and are extremely efficient offensively. The Heat rank second in the NBA in offensive efficiency while the Ducks rank fourth in college basketball.

With the return of Dominic Artis and Ben Carter, like the Heat, the Ducks can play super small or fairly large depending on the traits of the players in opposing uniforms and which Ducks are hot and which are not.

Both teams have two wily point guards who will step up when needed and take a step back when other players are flourishing. Of course, no player college or pro alike can compare to “The Chosen One,” but both teams have dynamic wings who can single-handedly get buckets and do other things to help their team. Plus, each roster includes athletic scoring forwards that are hard to leave open on pick and pops and can explode to the hoop. And a couple centers who may not pose much of an offensive threat, but will take up space and wreak havoc defensively.

Because each squad likes to play a lot of small ball, they are often overmatched on the boards. The Heat are ranked fourth to last in the NBA in rebounding rate while the Ducks are 96th in college basketball. But to counter size deficiencies that stem from small lineups, both teams play aggressive defensively. However, each does so in different ways. The Heat are one of the most aggressive teams in the NBA in defending the pick and roll. While some head coaches teach their big men to sit back and wait for the ball handler to come at them, the Heat’s coach Erik Spoelstra instructs his players to hedge the pick, essentially double teaming the ball handler and forcing him to make a quick pass or attempt to run around the hedge. To go along with that, weak side defenders such as James and Dwyane Wade are taught to play cornerback and try to intercept passes out of the double team. Their speed also helps them rotate quickly if the dribbler can handle the pressure.

Because college basketball isn’t as much predicated on the pick and roll, Altman utilizes different schemes to force opponents into precarious situations. The Ducks have mixed it up a lot this year, using some half court traps and zones to go along with standard man to man defense. Lately, and especially against BYU, the Ducks have pressed early and often against opponents. Like Miami, Oregon’s superior speed and athleticism allows it to take a lot of risks.

Still, the Ducks defense has a long way to go before being able to be considered in the same realm of defensive execution as the Heat. UO’s defense leaves a lot to be desired. The team’s best offensive players, Joseph Young and Johnathan Loyd, are often broken down in one-on-one situations and the team hasn’t yet had the paint presence to be able to deny lay-up opportunities consistently. Oregon ranks a dismal 108th in the nation in defensive efficiency so far this season. But it is unlikely that the Ducks inconsistent defense will continue. Though Oregon has easily learned to play together offensively, defense cohesion often takes longer to develop than offensive cohesion. Plus, led by Damyean Dotson, the Ducks have the athleticism to stay with opponents on the perimeter. And with the return of Carter, UO will be able to matchup inside more effectively.

But for every Miami Heat, there is an Indiana Pacers. The Pacers consistently dominate the Heat in the paint and on the boards and were one or two plays away from defeating them in the Eastern Conference Finals last season. If the Ducks resemble the Heat, the Arizona Wildcats mirror the Pacers.

Going up against the giants of No.1 ranked Arizona, it will behoove the Ducks to play either Waverly Austin or Carter for nearly the entire game. They will even likely have to play Moser and Cook some at the three to contain out of the gym leapers Aaron Gordon and Rondae Hollis-Jefferson. If they mix in some ball ball, the Ducks have the personnel to give the Wildcats some trouble.

However, against an athletic, up-tempo team like UCLA, you might see a sizable helping of small ball and some two point guard, no center lineups from UO. Like the Heat who are much more comfortable playing against smaller teams, UO will feel right at home against a UCLA team that ranks seventh in college basketball in points per game, six spots behind the number one ranked Ducks offense.

I can see it now. Loyd, Artis, Young Dotson and Mike Moser on the court together in the closing minutes of a tight game on the road, maybe even in Los Angeles.

It could be like Christmas afternoon all over again.