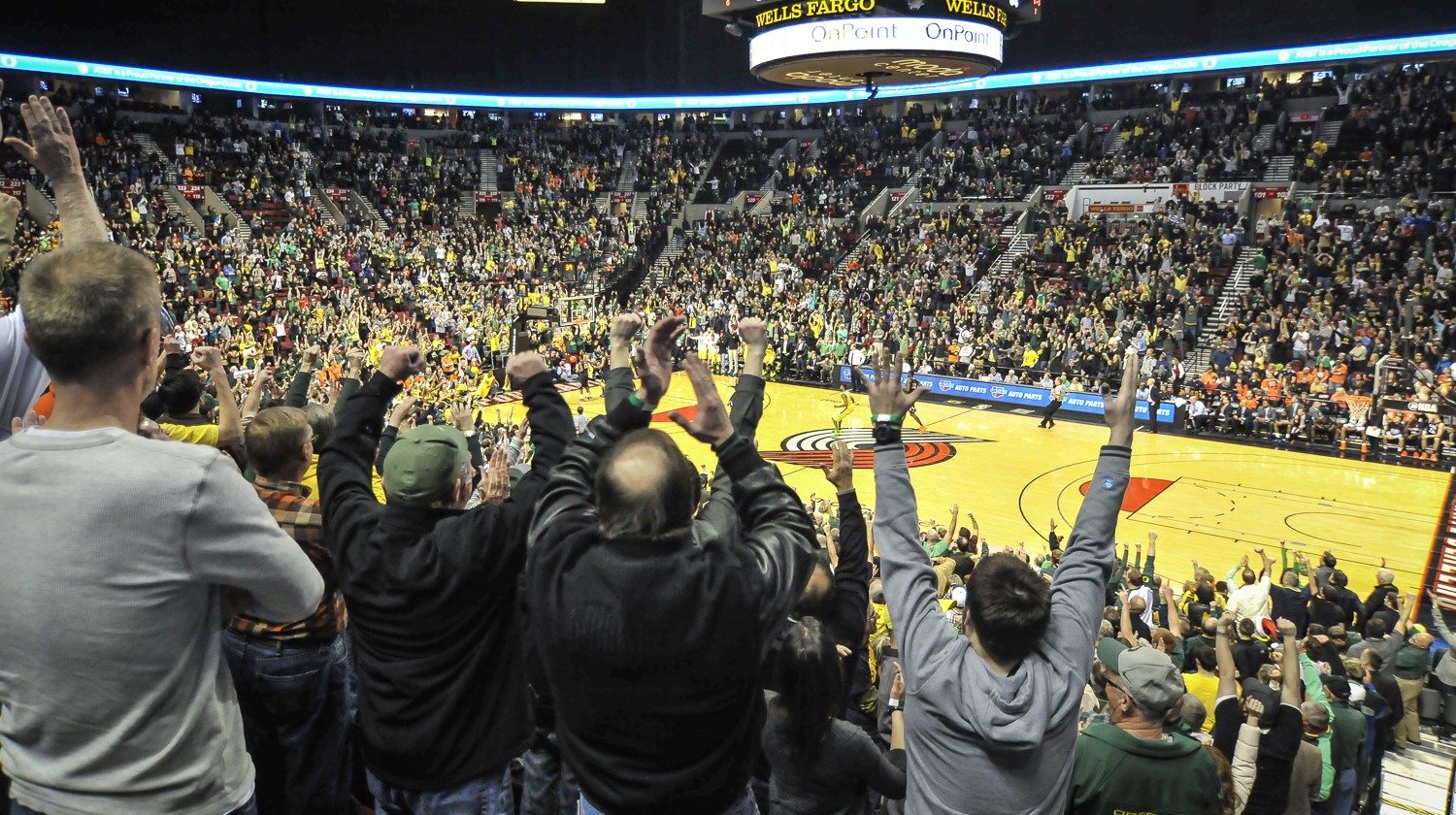 The Oregon Ducks(9-0) defeated the Illinois Fighting Illini(9-2) 71-64 at the Moda Center in Portland, Ore., and continue their unblemished 2013-2014 campaign. The Illini gave UO all they could muster, even holding a nine point lead mid-way through the second half. But once the Portland crowd turned up the volume, the Ducks energy followed suit. Led by Jonathan Loyd, Oregon made an admirable second half comeback, finishing the game on a 28-14 run.

The first half was played mostly at Illinois’ tempo: slow and methodical.The Ducks were out rebounded 14-19 and forced two less turnovers than the Illini in half one. Also, neither team was hitting three’s consistently(both shot less than 25 percent). However, UO shot 52 percent from the field, whereas UI shot just 39 percent. Illinois guards Tracy Abrams and Rayvonte Rice habitually slashed to the rim against UO guards and both finished the half with 10 points. Joseph Young and Damyean Dotson led the way for the Ducks, connecting on some open looks, scoring eight points each in half one.

The game started with both teams treading water, trying to figure out its opponent.The Illini were up 18-16 before fouling Mike Moser, putting them in the penalty. The foul kickstarted an 8-0 run for Ducks. However, the Illini retorted with a 7-0 run of their own. The first half ended in a 32-32 tie. Oregon’s turnovers, lack of fast break points and offensive rebounding prevented it from reaching its average half total of 45.7 points. At the beginning of the second half, Illinois made another push toward a W. Following a pair of lay ins by Young and Dotson, the Illini went on a 5-0 run, led by five points from forward Jon Ekey. The run continued in part because Ducks big men were struggling defensively, committing too hard to ball handlers on pick and rolls and leaving Illini forwards unguarded around the hoop. On the other side of the court, the Ducks had no offensive rhythm. Not only that but Illinois just played more disciplined, moving the ball around more often and more effectively than Oregon and staying honest defensively, even drawing a couple charges.  Illinois led 50-41.

But in a four possession stretch, Jason Calliste hit a three and converted a lay up and Elgin Cook ripped the ball from Rice and then dunked the ball at the other end after a nice pass from  Moser. Illinois coach John Groce was forced to call a timeout with his team clinging to a 54-52 lead. The run was ignited by the accelerated pace generated by the ruckus crowd at the Moda Center. After UO continued its run and took a five point lead, Illini G Joseph Bertrand hit a midrange jumper while falling to the ground. Loyd responded with a big jumper of his own after freezing his defender with multiple hesitation dribbles.

After UI cut UO’s lead back to three, the score was 67-64. With less than 35 seconds remaining, Loyd was fouled and converted both free throws in a one-in-one situation. Then Loyd stripped the ball from Abrams and converted a fast break lay in, sealing the Oregon victory. Loyd finished the game right on par with his averages, scoring 11 points and dishing out seven assists. Moser and Young led all Ducks with 14 points a piece. Moser also led the Ducks with nine rebounds. Like he has for most of the season, Cook provided the spark UO needed off the bench, scoring 12 points on 5-6 shooting.

Other than crowd energy, the difference in half two was the reversal of dominance on the glass. Oregon won the rebounding battle 17-8 and finished the game grabbing four more boards than Illinois. Both teams improved from the field after the break, but the Ducks finished the game shooting 56 percent, while the Illini shot 43 percent. UO held IU bellow its 201st ranked points per game average of 72.3. The Ducks also ended the Illini’s season-long streak of holding opponents below 70 points. Abrams and Rice were the game’s leading scorers, scoring 16 points each. Oregon continues its non-conference schedule against UC Irvine on Dec. 17 back at Matthew Knight Arena. The game will mark the return of former starting G Dominic Artis and C Ben Carter. Also, Waverly Austin started the first half of the UI game, but didn’t start the second half. Dana Altman’s minute distribution decisions will be very interesting to watch moving forward.