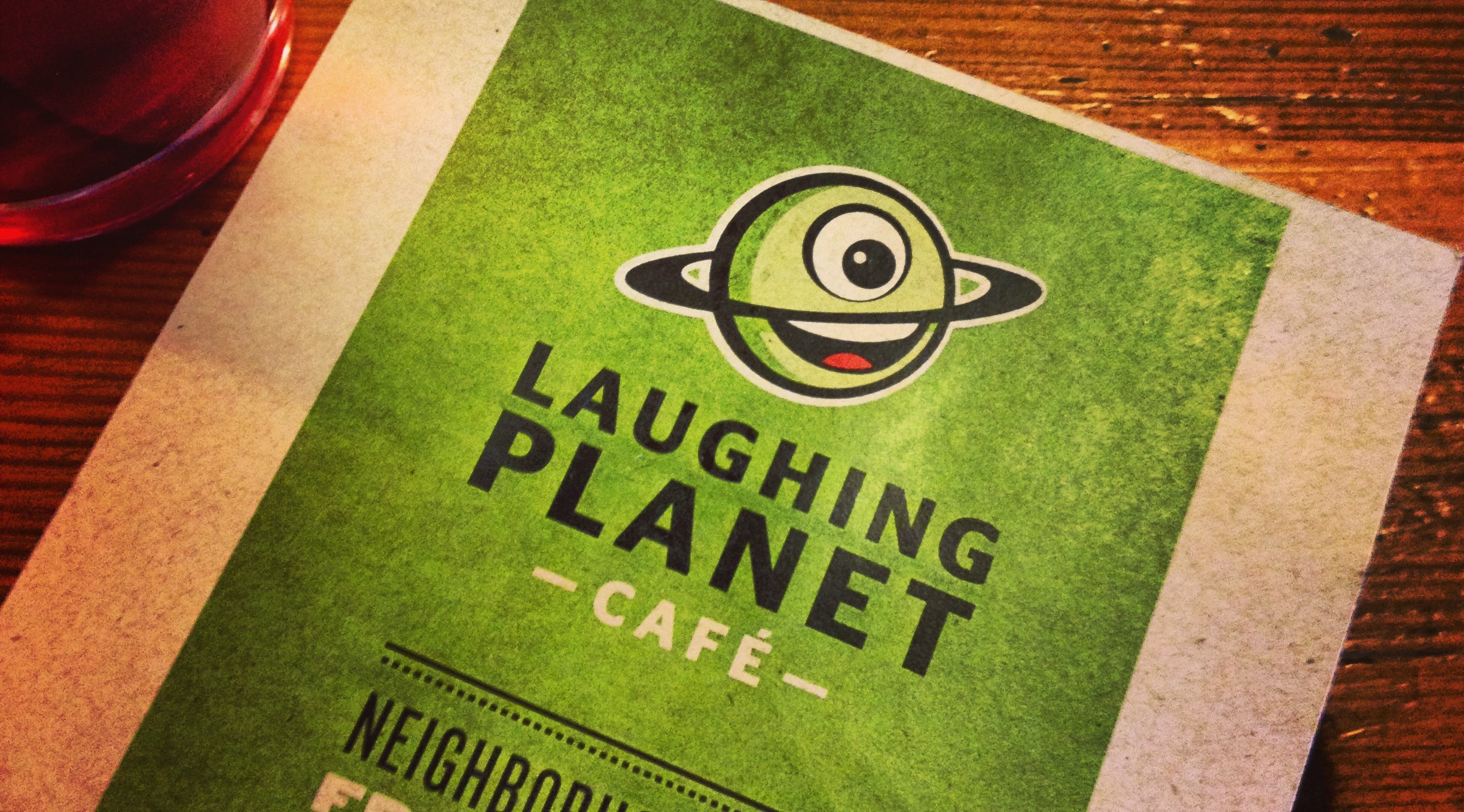 Although the other Local Lunch Gals weren’t able join me on this lunch outing, I was glad to finally be able to check out Laughing Planet Cafe, even if it meant going solo.

Laughing Planet has two locations in Eugene: one in the Whit on Blair Boulevard in the same strip mall where the new Falling Sky Deli is, and the other on 29th and Willamette just a few doors down from Market of Choice. Choosing the Whiteaker location because it’s closer to home, I arrived during lunch hour and found that it was pretty busy, but the line leading up to the counter where orders are placed was moving along quite rapidly.  As I waited, I looked around the naturally lit cafe that’s one big room with a an entire wall of windows. There’s table-top seating; as well as, bar seating that runs along the order counter.  I took note of the toy dinosaurs that were randomly placed on tables and shelves throughout, and the orange and green painted walls; along with, brightly colored framed chalkboard menus gave the ambiance a fun and relaxed atmosphere.

Not having a clue what to order from their relatively distinctive and unique menu, I asked the gentleman behind the counter to help me choose something.  Eager to help, he suggested I try the Seasonal special called the Cascadia Bowl: Roasted Pork shoulder (or I could have had baked surata tempeh), puréed maple roasted butternut squash, yams, carrots, herb roasted brussel sprouts, sauteed kale and a side of cranberry-apple chutney.  Intrigued, I took his advice and went with the Cascadia Bowl. Scanning their list of locally crafted beers from Eugene breweries like Viking Braggot, Oakshire, Hop Valley and Claim 52 (to name a few), I was tempted to have lunch with a pint.  But, since I was going to be picking up my kids at school right after lunch, I decided on a glass of fresh brewed berry iced tea.

After being given an order number and my iced tea, I took a seat at the bar with a bunch of interesting and amusing toy creatures that were enclosed in glass.  From a purple bobblehead poodle to a variety of aliens and alien-like dinosaurs, I think it’s safe to assume kids probably love going to Laughing Planet. My Cascadia Bowl arrived not long after ordering, and the spice-filled aromas instantly made my mouth water.  The shredded pork shoulder was piled high atop all of the other ingredients, and the gentleman who had taken my order suggested that I pour the cranberry-apple chutney on top and mix it all together – so I did.  The flavors were savory and ambrosial, and I especially loved the herb roasted brussel sprouts.  I was amazed that so many different flavors and textures were able to tie-in so perfectly – each bite was delicious.  Surprisingly, I even enjoyed the kale, which is a vegetable I tend to avoid, regardless of its health benefits.

While I ate, I looked over their menu which is really quite extensive.  From Cuban and Thai Bowls, Lebanese Burritos and BBQ Chicken Quesadillas to homemade soups, salads, smoothies and zappetizers (non GMO tortilla chips and house made salsa), they’ve got dishes for vegetarians and vegans as well as meals prepared without gluten.  Their approach to the food they serve is to get the food from farm to plate as quickly as possible. Whether it’s grass-fed beef from Carman Ranch in Wallowa, Oregon, or vegetables from farms on Sauvie Island along Oregon’s Columbia River, they support the local economy by sourcing foods from local farmers. Based out of Portland, with eight restaurants in various Portland neighborhoods, two in Eugene and one in Corvallis, Laughing Planet Cafe’s are considered quick-service restaurants with an approach to sustainability that offer nutritious, affordable and delicious fare, and I can’t argue with that. There’s no shortage of dinosaurs at Laughing Planet Cafe