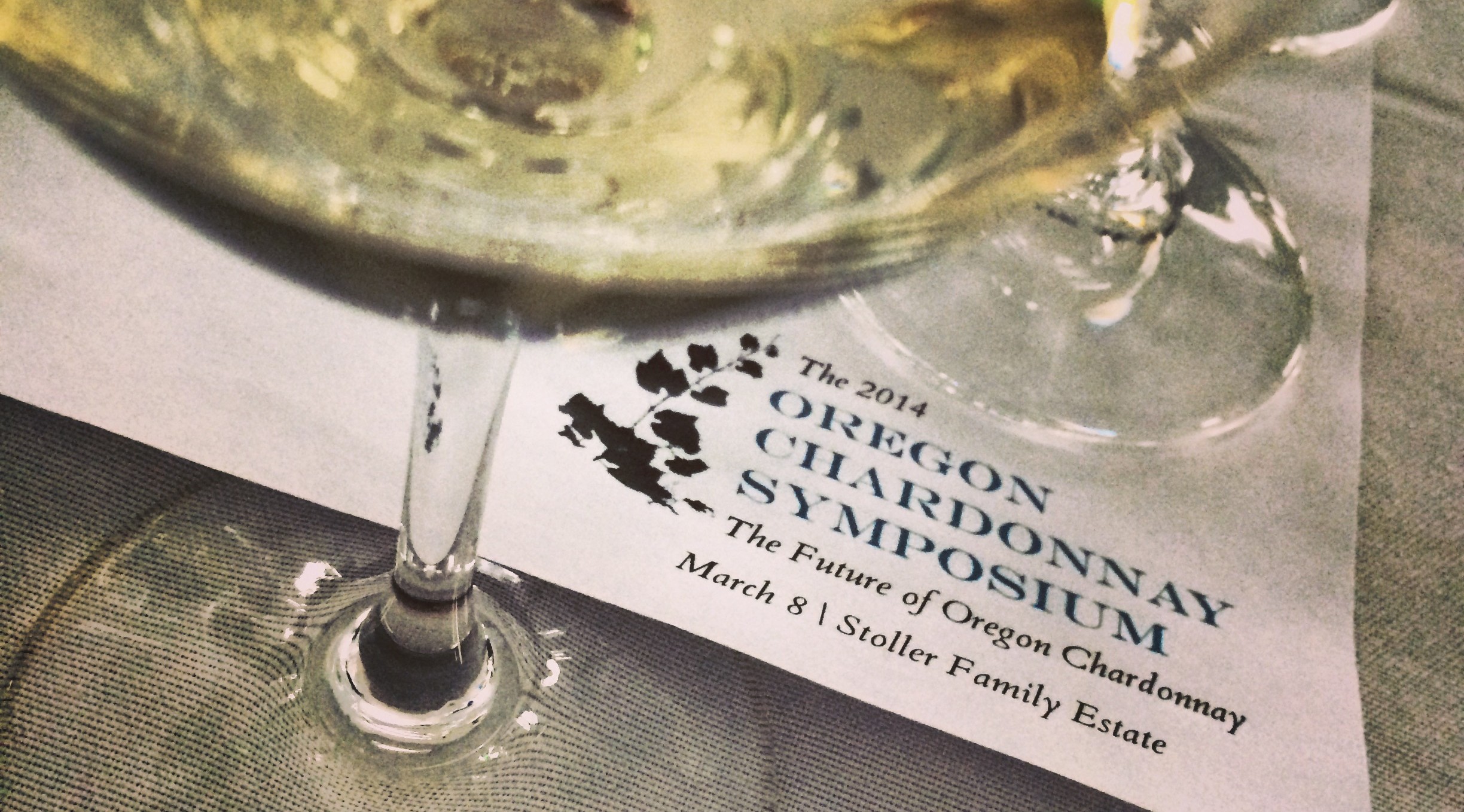 Nine stellar Oregon Chardonnays waiting to be tasted during the tech panel tasting.

During the tasting, which included nine incredible Chardonnays from nine different producers throughout the state, I was remarkably impressed with the common vision the panel members had for the future of Oregon Chardonnay: plant Chardonnay on your best blocks, the future for this popular and well-known varietal that thrives in our climate is far beyond promising.  Their common vision, along with their individual voices and styles, are a force that is bound to heighten worldwide recognition for Oregon’s elegant, terroir driven Chardonnays.

Each of the panel members discussed their thoughts on Oregon Chardonnays while we sampled their selected wine.  David Adelsheim thinks that Oregon’s Chardonnays are about “elegance, transparency and purity,” which perfectly describes his 2012 Willamette Valley Caitlin’s Reserve Chardonnay with its super fresh, focused and clean fruit that was very elegant, structured and quite classic characteristically.  Josh Bergström of Bergström Wines thinks that “vibrant acidity and mineral freshness” are of the utmost importance, which he totally accomplished with his 2011 Sigrid Chardonnay  – it was one of my favorites of the day.  Jesse Lange of Lange Estate winery believes that “acidity is the framework for white wine,” and everyone on the panel appeared to nod in agreement.  The Lange Estate 2012 Three Hills Cuvee most certainly offered a solid acidic backbone that rounded out the subtle, juicy fruit qualities to perfection. Two of the panel members who brought an international flair to the conversation were Dominique Lafor of Evening Land Vineyards and Véronique Drouhin of Domaine Drouhin Oregon.  Véronique noted that “clones, soil and the relationship with one another” were very important for producing outstanding Chardonnay.  The wine she selected for the panel tasting was Domaine Drouhin’s 2011 Edition Limitée Chardonnay made from 100 percent Dijon clones, and the super complex qualities really defined this Chardonnays classic rich palate that expressed the varietals true characteristics – it was especially lush and lovely. A true testament to the ageability of Oregon Chardonnay

Really, the list goes on and on – Oregon has a plethora of Chardonnays that are absolutely divine and of the highest quality.  Our producers are creating world-class wines that are true to the varietal, and without a doubt, fully deserve world-wide recognition.

And one Chardonnay I was lucky enough to sample is a true testament to how Oregon’s Chardonnay’s can stand the test of time and age with absolute beauty and grace, while retaining elegance, complexity and stellar depth of character: Eyrie Vineyard’s 1988 Chardonnay – wow. Simply wow.