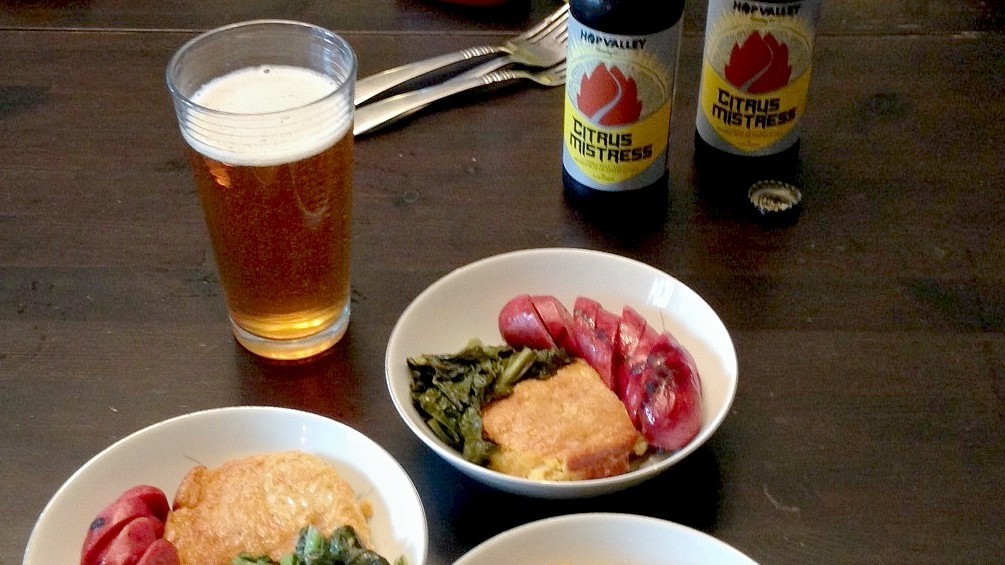 I have had the pleasure to attend two of Party Downtown’s Brewers Dinners recently, and both times I’ve walked away inspired to recreate one of their dish pairings in my own home.  Of the seven courses we dined on for the Brewers Dinner, the plate that made the biggest impression was the hot link sausage, cider braised greens, cornbread, apple jam and pig ear – paired with 2 Towns Ciderhouse Bourbon Barrel aged cider.

Having now sampled several varieties, I can say with confidence that Party Downtown excels at making their own sausage.  I happened to walk by their smoker before the dinner started, and I pretty much wanted to crawl inside it so I could bathe in the aroma of goodness coming out of that thing.  Au du smoked sausage. Imagine with me for a second, walking by the smoker that houses your future meal.  Several hours later, having said sausage on a plate in front of you, and a glass of the Bourbon Barrel Cider sparkling right next to it.  Anticipating how the sausage will taste, pull the flute full of cider to your nose and inhale the intoxicating scent of cider aged for four and a half months in a Buffalo Trace Barrel.  It is strong and heady.  A dry cider with a slightly sweet after taste, you know this course is going to be great – and it is.

For this work week meal inspiration, I picked up some German Oktoberfest sausages made in Woodburn, Oregon.  Mustard greens from the farmer’s market were already in the fridge, and I have cornmeal galore in the garage.  As the specific cider is not something readily available in the grocery stores I frequent, I decided to go for beer.  This is a bold dish, and  I needed something in kind.  A strong, forward flavor with citrus notes to replace the bourbon barrel infused aroma of the cider, so I picked up some Hop Valley Citrus Mistress.

I would recommend this beer to anyone looking to drink their first IPA. Yes it is bitter and hoppy as any IPA should be, but the citrus seems to round that off a bit and make it a rather friendly first try.  Citrus Mistress is a beer I could drink year round.  It’s an easy IPA to pair with barbecued food, and I am looking forward to stocking up while it is still on the shelves. Preheat oven to 350.  Heat the water, salt and butter in a pan until boiling.  Take off heat and add sugar and cornmeal, stir until sugar is dissolved.  In large bowl, mix the eggs, cream and nutmeg.  Combine the cornmeal mix with the cream mix, then add in cheese. Pour into a greased deep pie plate and bake for 45-60 minutes.  At 40 minutes, start checking it with a toothpick or knife.  Once this comes out clean after a poke, turn the oven off and remove to cool.

After the pudding is in the oven, start your Barbecued Mustard Greens. Turn your barbecue on medium-high heat, rinse your greens off and throw them on the grill in a bunch.  After about two minutes, flip them over and grill again for two minutes.  This does two things.  One it steams the inner leaves a bit, and two creates a nice char on the outer leaves.

Take the greens off the grill after both sides have been “cued,” chop them up, place in a tinfoil sheet about 12 inches long.  Sprinkle with salt, olive oil and balsamic vinegar and toss.  You want a decent coating of the three, so do it one more time.  Close up the tinfoil around the greens and get ready to throw them and the sausage on the grill.  Timing is everything here – you want your pudding to be nearly done at this point, because you are about 10 minutes away from plating your food.

Grill the Sausages and Mustard Greens just enough to create nice sear lines on the sausages.  When flipping the sausage, flip the tin foil packet.  When removing them both from the grill, crack open the packet so the greens stop cooking.  Plate your food and call the family to dinner.  I love Party Downtown’s use of various kinds of plates, so I pulled out Grandma’s old china bowls and got to work.

The char on the mustard greens helps to alleviate their usual bitterness.  My only wish is that I had used two bunches, hence my suggestion for 1-2 in the recipe.  None of us got quite enough.  The savory sausage and sweet cornbread pudding together in one bite is a meal in itself.  Pair this dish with the Citrus Mistress, and you have a party in your mouth! I appreciate Party Downtown’s innovative food style, their dishes worked very well with the 2 Towns Cider picks.  I am now on the hunt for a bottle of the bourbon barrel aged cider so I can work up a dish to pair with it.  I look forward to watching both companies to see what else they produce, and dream of future recipes inspired from the pairings at the brewers dinner that night.