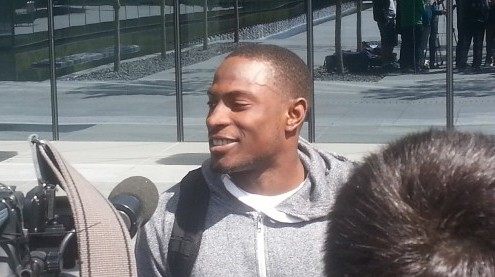 The Oregon Ducks Annual Spring game is next Saturday and there are several questions that many hope will be answered when the team takes the field. Several key players for the 2014 season have become leaders over the last few seasons. One is Oregon Ducks Wide Receiver Keanon Lowe who is being thrust into the spotlight as a likely starter who will likely be the projected top wideout for Quarterback Marcus Mariota following Wide Receiver Bralon Addison’s season ending injury. On Defense a key player has returned for the 2014 season after having the chance to turn to the NFL last season in Oregon Ducks Cornerback Ifo Ekpre-Olomu who will be considered a leader on the field this season. For Olomu returning to the Oregon Ducks was an easy decision, “I’m happy to be here and become a better player..” As far as how Spring Practice is going for the Senior, “I think its been going great so far. I feel like as a defensive backfield we’ve been able to advance our knowldege of the defene, I guess you could say your coaches have us prepared for this year.” For him individually he has also had some areas to work on this Spring, “It’s a daily prcoess. It’s the third year of spring ball now. Everyday you learn something new. I feel everyday I’m learning something I didn’t know before.” Olomu is confident in leading the team this season, and more immediately the Spring Game, he knows that the guys behind him are ready to step in, “Its going to be competitive from the corners to the safeties. Coaches will play the best four guys. It’s really a competition for everybody. These guys waiting in the wings that are just as capable as any other player out there.” On the other side of the ball the ‘next man up’ mantra became an official reality for the Oregon Ducks Offense at Wide Receiver.

Oregon Ducks Senior Wideout Keanon Lowe says with Addison down he’s not concerned about his role, “I’m proud of all our guys battling in Spring ball. You run a lot, a lot of guys have gone down and a lot of guys had to take extra reps. I’m really proud of how we’re competing right now.” Lowe says for the team the Spring Game is less about pressure and more about showing off what they have learned, “Spring ball is just another scrimmage for the fans. I think…players..look too much into the game itself. Every game is an evaluation. It’s just a fun experience. A lot of fans come out, it’s the first time to see us in a while, it’s a lot of fun.” As for the Wide Receiver corps going into 2014, Lowe feels confident, “I think as a whole. I can look at every guy in that receiving cortps and every guy has gotten better from the top down.”

I do know that the Oregon Ducks Spring Game format this year will differ from last year’s scrimmage and ‘weird’ scoring setup. This year will be much easier to follow because it will be played like a regular game. Field Goals, Touchdowns and Extra points. I am not sure how much field time that Oregon Ducks Quarterback Marcus Mariota will see as the bigger battle seems to be between the two backup quarterbacks. I will also be watching Wide Receiver Johnathan Loyd on Saturday to see how he has adjusted to football. What will his speed look like on the football field? Can he catch the ball? Can he run a solid route? Defensively I think there are less questions.

You have a defensive backfield returning that has plenty of experience starting with Olomu. I will be looking at Arik Armstead’s progression from last season and of course I’ll also be watching the pass rush for the Ducks Defense. I’m sure there are plenty of areas that will take my focus between now and the Fall, but this is my starting point to help me define what this team will be for 2014.

Oregon’s Spring game takes place at Autzen Stadium on Saturday, May 3rd and as of last check the weather looks to be partly cloudy and close to 70. I’ll take that anyday. Kickoff is set for 11am and the Pac-12 Networks will broadcast the game.

What areas are you ‘concerned’ about other than Wide Receiver for this year’s team? Let me know in the comments.