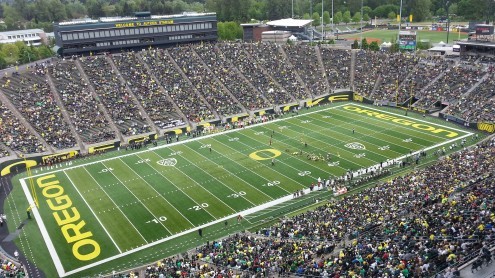 The Oregon Ducks Football Spring Game on Saturday was in part a day of remembering our freedom and the other part, less important, was the actual game. On a beautiful sunny and breezy day in Eugene the Oregon Ducks took to the field for their 15th and final practice of Spring that started on April 1st.

There were no real surprises. Starting Quarterback Marcus Mariota was nine of ten for one hundred yards and two touchdowns and both Running Back Thomas Tyner and Byron Marshall were better at catching the ball out of the backfield that picking up yards via a handoff. One of the bigger questions leading into the Fall is who will be the Oregon Ducks Backup
Quarterback. Both Jake Rodrigues and Jeff Lockie showed signs of being able to handle the ball, but no one really stood out.  Yet.  It looks like the battle will continue into Fall camp. Rodrigues was seven of eighteen for sixty six yards. Lockie, who showed some nice arm strength down field on several passes was seven for twelve for one hundred twenty one yards and a touchdown.  Taylor Allie has promise, but never really settled down during his time in-game.

There were several bright spots at the Wide Receiver position including the performances of Dwayne Stanford and Devon Allen who caught two long touchdown passes on the afternoon. Darren Carrington also had some nice touches on the ball for the Oregon Ducks.

One Wideout received a nice ovation from the crowd, but had a rough day on the field: former Oregon Ducks Basketball player Johnathan Loyd entered the game as a punt return man and lost four yards on play. For him, it’s about the experience of playing in front of likely the biggest crowd he has ever seen in the just over 37,000 in attendance on Saturday. DeForest Buckner had a nice play in the second quarter with a forced fumble and a recovery.  Of course the Quarterbacks in the game were wearing orange jerseys and were ‘touched’ down rather than tackled. Unlike a team coming into Autzen to play the Ducks, Michigan State went ‘live’ with their signal callers last weekend during their Spring Game, leaving one backup quarterback hobbling at the end of the game.

When it comes to games like the one played Saturday, one thing is more important than any other: the Oregon Ducks came out of the Spring Game healthy.

It’s hard to believe that in just a few months we will be back at Autzen Stadium for the first game of the season. There are certainly questions left to be answered about this Oregon Ducks Football Team, but if the performance on Saturday is any indication – we could be in for something special in 2014.

The Ducks face South Dakota State on Labor Day Weekend(August 30th) before a showdown with Michigan State on September 6th.

For a different take on the Oregon Ducks, visit Fansided’s AutzenZoo