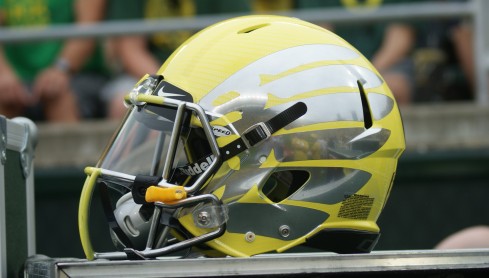 The 2014 College Football season for the Oregon Ducks won’t start until August 30th, but this past week was a big one for recruiting for Oregon Coaches. Over the weekend the team picked up three commitments from Offensive Lineman, a very important position moving forward for any team. These guys ‘in the trenches’ help protect the Quarterback, and speaking of Quarterback, Oregon has offered a 4-Star QB from Anaheim, California in Dual Threat Athlete Travis Waller. As it stands recruits have until the first week of February to make their final decision on where they will attend college, but it is clear in this recruiting class that the Oregon Ducks are looking to positions of weakness and they intend to fill them. Of course the addition of 4-star QB Waller would be a nice piece of the 2015 Recruiting Class as well.

The offer is now in his hands and his verbal commitment could come in the coming weeks.

The regular season for the 2014 Oregon Ducks begins on Saturday, August 30th against South Dakota. Kickoff for the opener is set for 7:30pm PT on Pac-12 Networks.