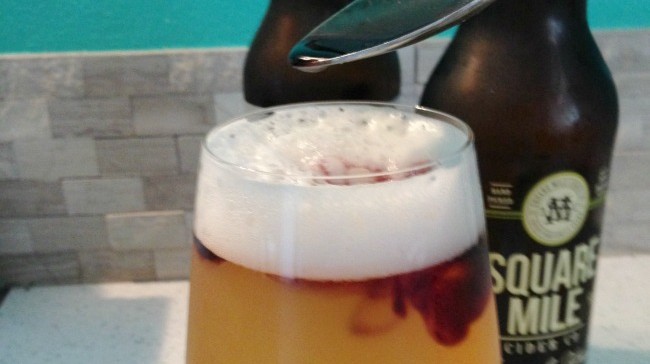 The Snakebite and Black.  A mixture of beer, cider, and black currant syrup or liqueur. A drink that some pubs in England apparently refuse to serve.  Well, according to a few websites online at least, and the reasons vary based on the site.  What is it about this drink that evokes such legend?  Does it cause powerful intoxication?  Or is it simply a mixer that has the potential to make bar owners look bad, as if they are serving cloudy beer to customers?  Enjoying a good mystery, especially one revolving around alcohol, I set out to create my own Oregon version at home. According to Norm of Manchester UK on www.theguardian.com, when the question of the drink ban was broached, he stated “Having worked behind a bar for many years, I know nothing of chemical reactions, but plenty about people’s reactions, and snakebite seems to have the power to intoxicate quicker and more potently than your average brew.”  Beer and cider are not typically known for their unbelievably high alcohol content, so I cannot not imagine one glass having the same affect as say a mixed drink using hard alcohol. Is this because people swill these down hand over fist? For my experiment, I chose Hop Valley’s Double D Blonde Ale, a crisp and easy to drink beer with an ABV of 5%.  Mixing with that, I used Square Mile’s Spur & Vine.  A hopped apple cider, ABV 6.7%, slightly sweet, nice and dry. Pour the glass half full of cider.  Using a steady hand and the back of a spoon, slowly pour the beer over the spoon, allowing the beer to rest on top of the cider.  Finally, top with a tablespoon of a dark berry liqueur or syrup.  I used homemade elderberry bitters, for a drier and not so sweet a finish. I think I have solved the issue.  Yes, I know I have.  The drink-ability of such a beverage on a scale of one to ten is a hundred.   The color is appealing – a head to toe veritable sunset.  Slightly hazy due to the beer, just like all good afternoons should be.  Bringing the glass to your nose, flowers, summer, hops and apple are all noteworthy.  First sip of hops and citrus hit you only for a second, followed by hints of grain, carbonation and fruit.  Minimally bitter with a sweet dry finish, this drink is easily consumed in large quantities.  It is no wonder if some pubs refused to serve it.  This mix is the perfect balance for those days when you can’t decide between beer or cider.  Go for the middle.  Drink both.

The fifth definition of the term “snakebite” on www.urbandictionary.com reads as follows: “Lager, cider and blackcurrant, sometimes referred to as a snakebite and black, diesel (scotland) or even “Jungle Juice”.  The combination of sugar and alcohol goes to some peoples heads and as a result some publicans refuse to serve it and claim it is illegal.”   Did it go to my head?  Considering that I paired it with a quesadilla and a hearty baby kale, arugula and spinach salad topped with roasted chicken and homemade Caesar dressing, I can honestly say that no, it did not. Had I drank more than one? Well, that would have been a different story.