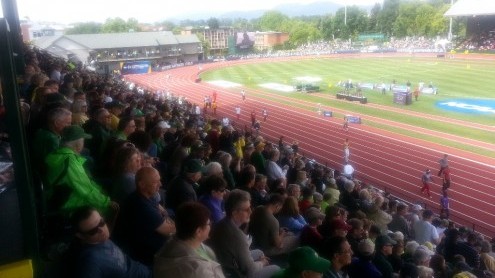 The 2014 NCAA Track and Field Trials was a four day event for the home team Oregon Ducks. Both the Men’s and Women’s teams showed grit in events ranging from distance running, the javelin, the high jump and showed that they could not only compete with the best schools in the country, but also beat them when it counted most.

What I will remember most about the Championships are the final races for a decorated Oregon Athlete, Senior Lauren Roesler, who came to Eugene with accolades and perfected her approach in the 800 meters that would give her a National Championship in the event in the second to last day of competition. She studied Sports Psychology and will likely enter the field of employment. It is not known her her aspirations on the track will continue professionally, but I guess time will tell. From a departing athlete to one that is just getting started as an Oregon Duck. Mac Fleet celebrates following his win in the 1500 Meters during the NCAA Track and Field Championships. Justin Phillips/KPNWSports

10,000 Meter National Champion Oregon Ducks Freshman Edward Cheserek made a name for himself at the NCAA Championships this past week at Hayward Field. He ran to a 10,000 meter victory on Wednesday night and came oh so close to a 5,000 meter crown on Friday night after taking the lead, he lost in the end on the final stretch to Lawi Lalang from Arizona. Cheserek is just getting started with the Oregon Ducks and will have plenty more opportunities on the National Stage in the coming years.

As I have written here before, the Oregon Ducks and Hayward Field are a special place for Track and Field. The fans are the most knowledgable anywhere and it does not matter if you are not wearing green and yellow, they will still cheer for you. They cheer for the competition as much as for their school, perhaps a little more. On the final day of competition the Oregon Men were in good shape, but the Oregon Women had less opportunities at a National Title than the teams ahead of them.

There were several races that came down to the final stretch and even the last few feet, including the Men’s 1500 meters on Saturday between Lawi Lalang of Arizona and Mac Fleet or Oregon, however this time, unlike Friday night, an Oregon Duck would win the National Title in an event. Fleet has won the title in two consecutive years now and had a time that was sub :55 on the final lap at Hayward Field. The crowd was into it and loud as Fleet crossed the finish and then pounded his heart toward the fans in the stands. A Packed Hayward Field on the final day of the 2014 NCAA Track and Field Championships. Justin Phillips/KPNWSports

Oregon’s Crowser would go on to win the Javelin and Oregon Ducks Devon Allen would speed to the second fastest time ever in the 110 meter hurdles to give the Oregon Men’s team the National Title. The Women were twelve points back of Texas A&M entering their final event of the day, the 4×400 relay. Senior Laura Roesler was able to get the team into third place during the race and Phyllis Francis kept them there till the end where they would finish.

In the team standings the Oregon Men won their first Team National Championship since 1984, the Oregon Ducks Women finished in third place to close out the season.

For more on the Oregon Ducks, visit AutzenZoo.com