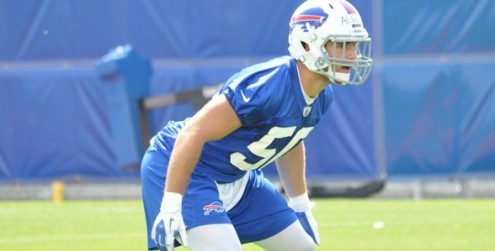 In a year where the Buffalo Bills looked to be in contention to compete for a Super Bowl, disaster struck before the first snap of Fall Camp. Word spread on Twitter late on Tuesday that the former Oregon Ducks Linebacker had injured his knee during a workout in Oregon. It was later announced that Alonso, the Defensive Rookie of the Year from 2013 had torn his ACL. He will be out for the upcoming season.

ESPN also reported that Alonso had been recovering from hip surgery in the offseason to fix a torn labrum suffered last season. Kiko Alonso played every Defensive snap last season for the Buffalo Bills and ranked third in the National Football League in total tackles with one-hundred and fifty nine. The Buffalo Bills are off for the summer and will begin Fall Camp on July 18th in Rochester, New York.

The Buffalo Bills do have some depth to work with at the Linebacker position for the upcoming season. Eight year NFL Veteran Manny Lawson has experience at the position and the Bills did draft a Linebacker in the 2014 NFL Draft in Preston Wilson taken in the third round. Already this offseason several important and key players from teams throughout the NFL have suffered knee injuries and will be out for the entire 2014 campaign,

Dallas Cowboys Linebacker Sean Lee suffered an ACL tear last month and will be done for the year. The Cowboys recently put him in Injured Reserve ending his season and traded for Baltimre Ravens Linebacker Rolando McClain to fill the void. As for Buffalo, it is not known if they will do something similar as far as a signing or a trade.

This is a tough break for the Buffalo Bills as Kiki Alonso’s star was rising, and in a big way. He was a force in the NFL last season. He will be out for six to nine months with a recovery period. Surgery for the injury has not yet been scheduled, but is expected to be in the coming weeks.

Buffalo starts the 2014 NFL Preseason playing the New York Giants on August 3rd at 8pm in the Hall of Fame Game on NBC.