A High Speed Race In A Narrow Little Space 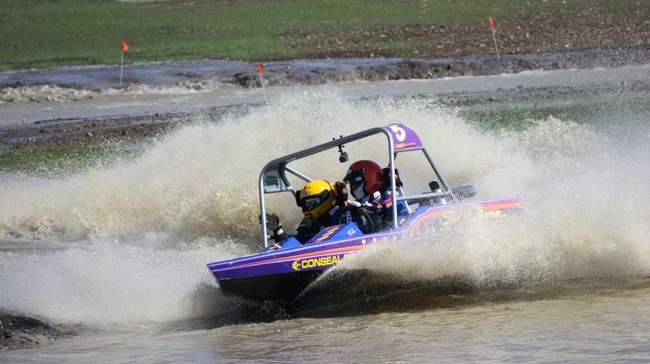 It was a race for the fastest time to the finish line this past Saturday at Lebanon Oregon’s newest racing facility.  Moving from it’s original track in Shedd, Oregon, the USSBA  (United States Sprint Boat Association) celebrated its newest facility Global Jetsprint Track located in Lebanon, Oregon.  Opening the gates at 8 am Saturday for their annual event. This is my third year covering this event and I must say I was extremely excited.  For a couple of reasons, okay, a few.  There is never a dull moment at the races!  Live, non-stop fast paced action any way you look at it.  These boat can get up to 90 mph within seconds and on such a small track, that is pretty amazing.

I knew I was going to see a lot of the boats I have watched over the last few years race as well as some new ones and I couldn’t wait to see the new track.  The Global Jetsprint Track replaces the Field Of Dreams where it has been held these last few years.  Now located on Airport Road in Lebanon, it is just a jaunt from the Lebanon Speedway.

The property is set up well, with ample parking for the anticipation of the many race fans that will be attending. The track is new and of course, with all new things there are kinks.  The first four boats out onto the water all returned to shore with DNQ’s (did not qualify).  The 5th boat broke that cycle but it came to light that the track needed a little bit more adjusting so out came the excavator and the ditch was dug a little deeper and the day continued.

The grass is still growing and there is plenty of dirt, rocks and mud around but in time, it will age perfectly as did the Field of Dreams.

Here are the winners for the day in the three separate classes. If you have not been able to make it out to the races, I would highly encourage you to do so.  The tickets are fairly inexpensive at $20.00 per adult.  It is good clean fun and very exciting.  It gets pretty hot out there and many people bring their fold up sunshades and umbrella’s, blankets and chairs.  Don’t forget your sunblock!

You can bring your own food in too which is pretty cool but if you just don’t feel like cooking, let me tell you they got it going on there.  I was at the track nice and early at 8 am and smelling those beans and bbq cooking that early in the morning was amazing.  Is it ever too early for Kettle corn?  I don’t think so.  I was running late so I had some fries for breakfast!  They even have a beer garden serving adult beverages.

There are two races held in this part of the world, the next race, which is held August 30th, 2014 promises to be a fun filled weekend as the world finals will be held at this track!  How exciting is that?  You can read more about it here. Some very fortunate and dedicated racers from New Zealand and Australia (where the sport actually began) put their boats in shipping containers last month in order to get them here in time for the finals.  They are spending upwards of $30,000 to get their boats here if that tells you anything.  This will be a really big event!

Due to a prior commitment, I was unable to spend the entire day taking photographs as I usually do but I was able to get a good idea of what to expect for next months race.  I am excited to see how the track has progressed as the grass grows in on the newly developed site. I hope you enjoy my photographs in my photo essay below.  Some of the photographs captured the boats in what seems like  somewhere they shouldn’t belong, which makes it that much more interesting.

I sure hope to see you out there at the races and if you see me, stop and say hi!  I am always up for a chat.