The last segment of the 4th of July party out at Dexter Lake State Park brought us one more band, my favorite rendition of the Gettysburg address, and what is now my favorite rendering of the National Anthem. That’s since we all heard Whitney Houston add that dramatic note that popped into the stratosphere (and we all collectively prefer never to hear again now) for the first time.  All this followed by the Fireworks. 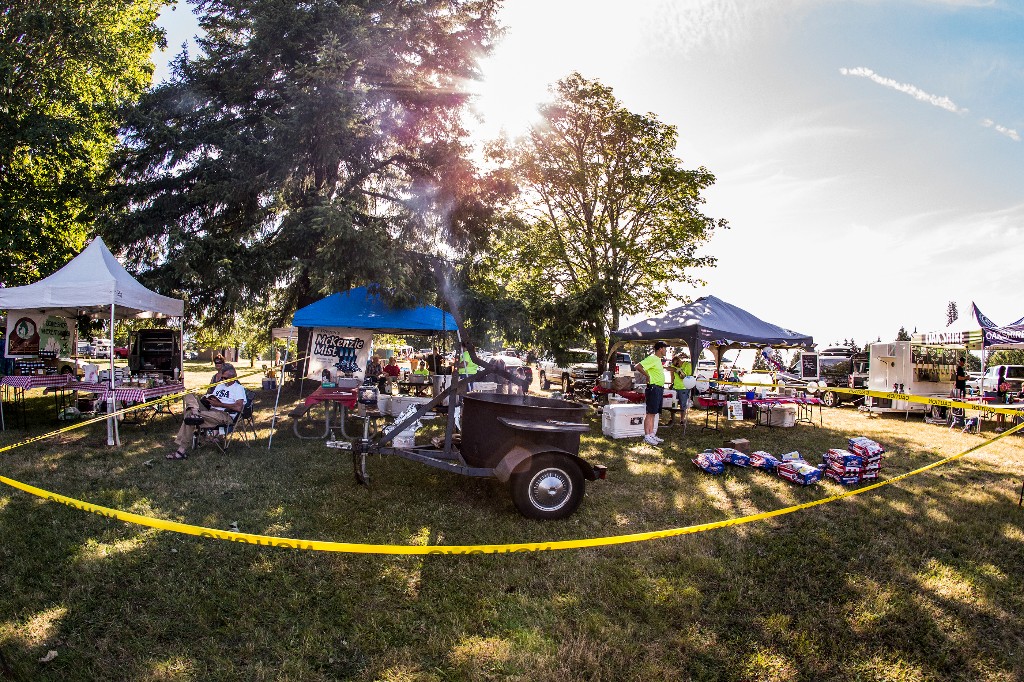 An interesting thing happens out at Dexter Lake Park during the 4th of July, it always starts out sparse, slowly building till around 5pm you start wondering where all the people came from.  By 7pm the sun is starting to hide behind the trees and the crowd size has gone up by another third. 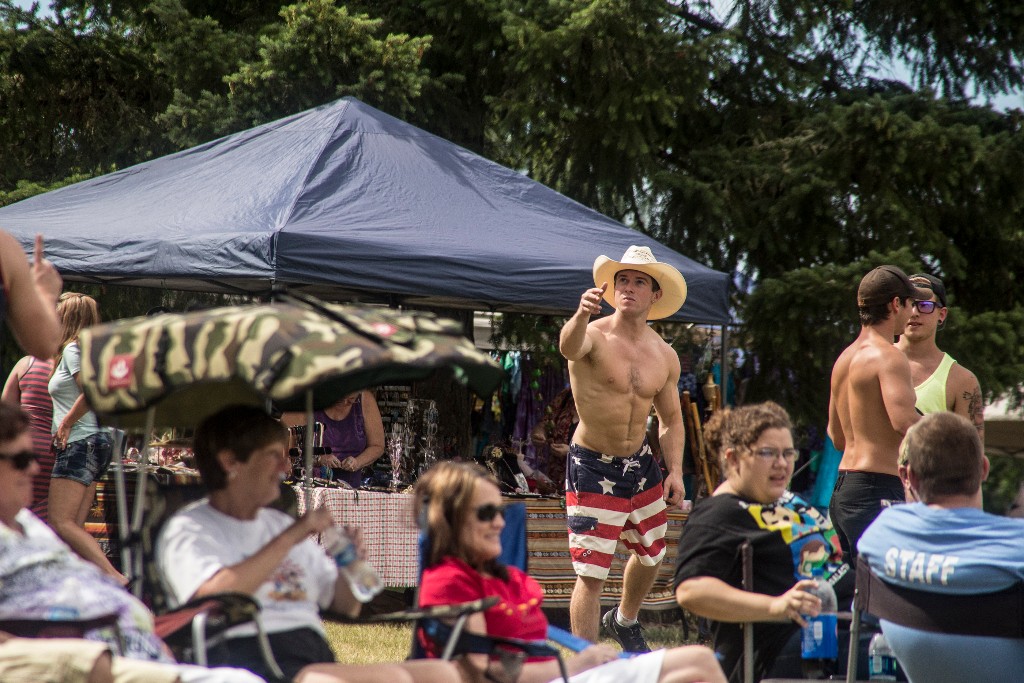 Come 9pm when the last band kicks off, the park population has swollen to more than double the 5pm count.  As the last band takes the stage, it’s starting to get dark and the glow necklaces and the dancers come out like local firefly’s.  Everyone has emerged from under trees and pop-up covers and umbrellas and campers to find their spot on the grounds for the coming pyrotechnics.

Everyone is having a very good time.  Even with the Steel Pail / Bigfoot Distributing beer garden, there were no fights, no hassles, no illegal fireworks – believe it or not.  Guardian Event Services brought in a team to provide overwatch. They spent most of their time trying to keep the musicians out of the fireworks safety area. In fact the number one sound you hear when The Procrastinators end a song is cheering, clapping and laughter; little kid boisterous laughter, grown up chuckles, teen guffaws.

Tim Chuey takes the stage as the last song ends and delivers one of the most memorable speeches given by a U.S. President: 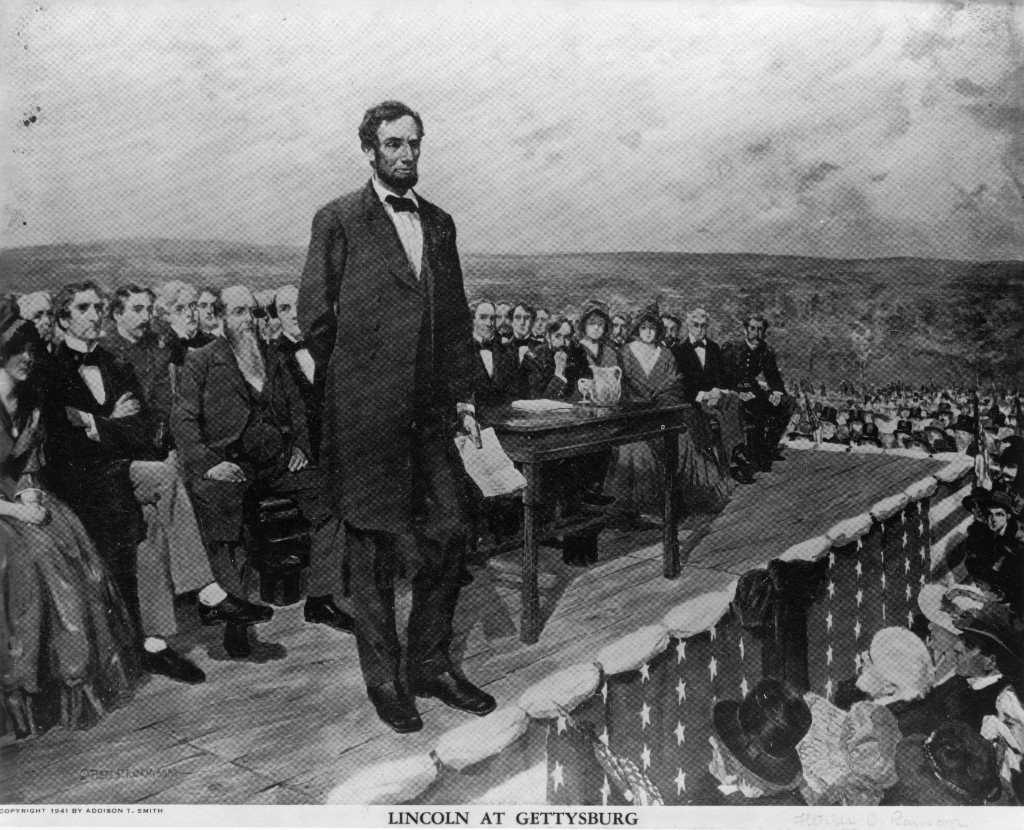 “Four score and seven years ago our fathers brought forth on this continent, a new nation, conceived in Liberty, and dedicated to the proposition that all men are created equal.

Now we are engaged in a great civil war, testing whether that nation, or any nation so conceived and so dedicated, can long endure. We are met on a great battle-field of that war. We have come to dedicate a portion of that field, as a final resting place for those who here gave their lives that that nation might live. It is altogether fitting and proper that we should do this.

But, in a larger sense, we can not dedicate — we can not consecrate — we can not hallow — this ground. The brave men, living and dead, who struggled here, have consecrated it, far above our poor power to add or detract. The world will little note, nor long remember what we say here, but it can never forget what they did here. It is for us the living, rather, to be dedicated here to the unfinished work which they who fought here have thus far so nobly advanced. It is rather for us to be here dedicated to the great task remaining before us — that from these honored dead we take increased devotion to that cause for which they gave the last full measure of devotion — that we here highly resolve that these dead shall not have died in vain — that this nation, under God, shall have a new birth of freedom — and that government of the people, by the people, for the people, shall not perish from the earth.

As the applause began to die down, Tim introduced TR Kelley for the National Anthem.  We had scrambled while Tim was preparing to the The Gettysburg address to find someone to do it; we had forgotten to arrange it.  Steel Wool drummer Randy Hamme mentioned that their bassist, TR Kelley, loved to do the national anthem, but she had gone to their campsite to change.  Randy grabbed a bicycle and set out, 3 of us started doing warm-ups and trying to find a safe range to sing the vocally challenging song (yes, I was ready to give it a go).

As Tim was finishing, in came Ms. Kelley.  Without missing a beat Tim introduced her, the firetrucks bracketing the stage like sentinels lit their parking lights, and magic happened.  This was no common attempt at the song, no bombastic delivery or self-aggrandizing vocal theatrics, this was love.

As the first notes left the speakers it was evident what a clear and distinctive voice she has.  As the second phrase began to flow from her you found yourself on your feet, your hand moving self-consciously to cover your heart. As she rose to the rockets red glare, sung so simply and carefully almost as a question, I could see the crowd from the stage being caught up in her voice.  As she entered the closing stanzas she somehow sang it as both a question and an affirmation; a Mona Lisa like rendering of the most mishandled part of the anthem.  She had us all, every one.

The word “brave” began at her microphone and ended with the blast of sirens from the Firetrucks and the sounds of the first fireworks climbing skyward.  If you missed it, you really missed it.

Thank you everyone who helped make this 4th of July a spectacular success. Photos by Billie-Jo Miller & Tim Chuey.